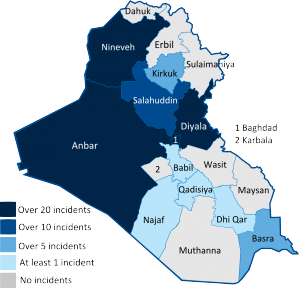 Anticipation of a growing role for US ground troops reignited historic divisions within the governing elite during the reporting period, as MPs clashed over claims that foreign personnel would be granted immunity from prosecution under Iraqi law. While PM Abadi has publicly denied the allegations, following the announcement of 1,500 additional US advisers to the Kurdish region on Monday 08 December, the issue remains an important unresolved issue in the coalition’s counter-ISIS strategy. Failure to agree legal immunity for US servicemen played an important role in the Obama administration’s decision to remove combat personnel from Iraq in 2011, and has the potential to resurface should foreign troops be requested to fight alongside Iraqi and Kurdish forces in an imbedded role as part of efforts to reclaim major cities from ISIS control. Failure by ISIS fighters to dislodge Peshmerga and Iraqi army positions over the past two weeks has raised the prospect of a major allied-counter offensive over the winter period, though crucially with plans to raise National Guard forces still deadlocked in the national parliament the coalition still lacks sufficient troop levels to capture and hold such targets.

ISIS fighters maintained an unyielding pace of attacks across the Kirkuk, Nineveh and Tikrit frontiers over the past seven days, repeatedly testing Peshmerga defences despite high rates of attrition from coalition bombardments. With the frontline in Kirkuk only tentatively held in the city’s outlying villages, ISIS militants have retained their capacity to launch damaging raids in urban areas, as well as facilitating the movement of heavy explosives to cells within the city. Proof of this latent capability, occurred on 04 December when a VBIED detonated in the city’s Shorja area, killing 15 people. While Peshmerga forces have demonstrated their capability to resist the majority of ISIS assaults in recent weeks, close coordination between Iraqi Army, Kurdish militias and coalition air teams has been central to this success and will remain of key importance over the coming months as the Iraqi government sets out plans to finally retake the second city of Mosul. Efforts to isolate the city are already underway, with Kurdish ground teams flanked by coalition air support completely clearing ISIS units from the Al-Gwer suburb on 02 December. At present however, efforts to press into the city’s outlying districts remain unlikely, given the absence of a coherent Iraqi Army infantry presence and the reluctance of Kurdish commanders to incur the heavy casualties expected from a door-to-door campaign to clear the city.

ISIS-initiated car bombings returned to central Baghdad during the reporting period, as militant cells revived attacks in the northern and western districts of the city. As before, mixed neighbourhoods such as Jihad Bayaa close to the international airport, saw the most selective targeting by insurgent forces, with attacks largely confined to acquaintances and property of ISF personnel. This remains in stark contrast to Shia majority zones, including Sadr City which this week saw at least nine killed in indiscriminate VBIED strikes on “soft” civilian targets. The surge in violence was also reflected in renewed clashes in the disputed terrain of Baghdad’s northern villages, as ISIS command cells shifted focus away from the traditional flash points of Hit and Ramadi. On 06 December alone, six separate attacks were launched across Tarmiya, close to Baquba, including a deadly suicide VBIED on a joint ISF patrol. At present the raids have not produced any change to the existing battle frontier, with mobile assaults on ISF and PMU positions in Huz repulsed by security forces this week. Increased coordination between pro-government militias and tribal fighters also recorded some successes, with combined forces in central Ramadi successfully defending against concerted attacks on the government department’s complex on 08 December.

Low level bombings continuing in Basra city amid the prospect of surge in sectarian violence during Arba’een celebrations in Najaf and Karbala. With no further ISF offensives reported in Baghdad’s southern belts, small scale IED strikes represented the primary risk to operations this week, the majority of which remain confined to Basra city and Babil’s Mahawl district. While the environment in Karbala and the Najaf shrines is currently stable, the arrival of thousands of Shia pilgrims to holy sites, (including the Imam Ali Mosque on the Basra-Zubayr road) has the potential to result in severe traffic disruption on the 13th December, as well as attracting the attention of local Sunni extremist elements. Popular demonstrations were also recorded in Basra, Najaf and Nasiriya over the reporting period, all of which were exclusively peaceful. 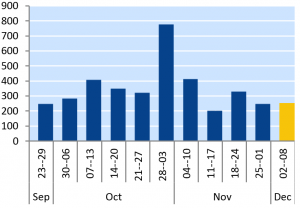