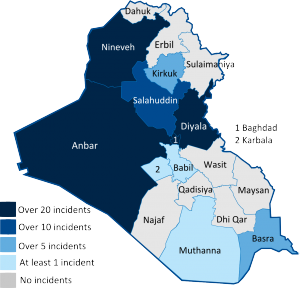 Reconciliation between Sunni groups and the Iraqi state remained at the top of the political agenda this week, as PM Abadi sought to strengthen his domestic and international alliances. With Sunni-tribal fighters now fighting alongside ISF units across Anbar, Salahuddin and Nineveh provinces, cooperation between the two groups has improved substantially over recent months, though crucially such alliance remains heavily dependent on mutual anti-ISIS sentiment. In a bid to devise a common strategy to the ISIS threat, Sunni leaders including Iraqi Vice President Usam Nujaifi are scheduled to meet in the Kurdish capital of Erbil this Friday. Central to these discussions is likely to be the issue of the future role of the Iraqi Army in ISIS-held Sunni areas, with many factions concerned over potential reprisals and revival of the Maliki era “old guard”, despite the moderate policies of the current premier. While plans for the recapture of Mosul are scheduled to be delayed until the new year according to various Iraqi officials, Sunni fighters are likely to represent a vital part of this process, with KRG News Agency “Rudaw” this week citing evidence of as many as 10,000 former residents and security officials currently undergoing training in the Kurdistan region for the operation.

ISF reserves bolster counter-offensive as coalition forces delivery heavy bombardment of militant positions around Kirkuk. Outlying villages, including Al-Khaled, and Mullah Abdullah south and west of the city saw a particular focus for combined air forces, killing up to 50 ISIS fighters in three separate raids on 14 December. The operations came amid a surge in ISIS recruitment and military offensives in the central-northern territories, with tanks and armoured vehicles reported to have been used in assaults on Baiji town on 10 December, prompting ISF units take up positions on rooftops to repel the militants. Further north in the Mosul and Sinjar territories, smaller ISIS raids were repelled by Peshmerga and local tribal forces. At present, no further movements have been made by Iraqi army units on the ground towards the re-capture of Mosul, despite unconfirmed reports that militants are preparing ditches and land fortifications against an upcoming assault. Nonetheless, ISF advances are anticipated to keep pace for the coming week, with Tikrit and Balad expected to see the bulk of ISF operations, following a heavy build-up of troops over the reporting period.

ISIS make gains west of Ramadi as ISF-tribal forces run low on ammunition and supplies. The Wafa sub-district south west of Anbar’s second city saw the greatest push by militants this week, falling under the control of ISIS on 15 December following three days of extensive fighting by anti-ISIS tribal militias. The attack came three days after the Mahbubiya and “kilometre 18” stretches of disputed territory close to Hit also fell to insurgent forces. While the offensives failed to lead to any significant shift in the existing stalemate over Ramadi or the Fallujah-Baghdad road, militants remain able operate with impunity around the town of Taji (10km north of Baghdad), launching on 09 December a series of mortar attacks on the city’s north-western Kadkhamiya suburb. In total at least two civilians were killed in the barrage along with 18 others injured, primarily within the northern-most neighbourhood of As-Shula. At present, ISIS mortar teams are not assessed as operating close enough to Baghdad to represent any major threat to Baghdad airport or other key infrastructure sites.

Arbaeen celebrations pass with minimal disruption, despite threat of mortar attacks and bombing plots against northern shrine cities. Some 17 million people are known to have travelled across Southern Iraq to visit the Imam Ali Mosque in Basra’s Zubai governorate in this year’s pilgrimage, making the event one of the largest in recent decades. While heavy congestion occurred along major routes, tight security procedures in both urban areas and along the Shalamcha border crossing served to prevent any major attack by extremist elements. Only three days earlier, militants based in Anbar’s Nukhaib area directly east of Karbala succeeded in striking a number of civilian buildings in the city, resulting in at least one dead. The interception of two car bombs in the days preceding Arbaaen have also added further evidence of a local cell operating from within the city, following failed IED strikes in the previous reporting period. With ISF clearance operations paused in the southern Baghdad belts for a second week, low level violence, including sporadic IED and shootings in Basra and Babil’s Mufaqiya are anticipated to remain the principal driver of insecurity in the south for the short term. 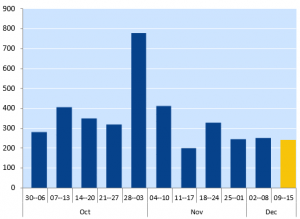