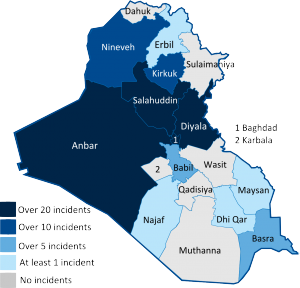 The establishment of new Sinjar governing institutions revives KRG-PKK rivalry as Peshmerga operations continue to resist ISIS attacks in the Gwer-Mosul corridor. Formed on Wednesday 14 January following the nomination of local residents of the Sinjar (also known as Shingal) and surrounding regions, the Yezidi administrative council has evoked a mixed response from regional decision makers, with local groups hailing the venture as a major step forward in autonomy for the Yezidi peoples, while at the same time dismissed as an “illegal administrative system” and product of “foreign interference” by the Kurdistan Regional Government’s (KRG) President Massoud Barzani. While unlikely to produce a direct outbreak of hostilities between the KRG-backed Peshmerga and other Kurdish forces in the newly liberated areas, the move nonetheless poses a direct challenge to the Barzani administration which retains theoretical authority over Sinjar, but has struggled to rebuild its popular base following the loss of the territory to ISIS militants in August 2014. Accusations of direct interference by the banned Turkish rebel movement, the Kurdistan workers party (PKK), have also added to the escalating rhetoric from the Erbil government, and have served to highlight the pressing political challenges for any future re-occupation of ISIS territory, not least the ethnically diverse city of Mosul.

No significant change to frontlines were reported across the north over the reporting period. As before, the main stages of conflict remained the outlying villages of government and Peshmerga-held towns north of Samarra, witnessed in a series of coordinated raids first reported in Samarra on 13 January, and then striking Tikrit and Baiji three days later. The one major exception to this trend has been the daily incidence of SAF, sniper and kidnapping attacks in Muqdadiya, east of the provincial capital Baquba, a product of both incessant ISIS night time raids, as well as local violence stemming from the city’s historic Sunni-Shia tensions. In one particularly deadly attack this week, ten civilians were wounded when a gunman armed with a suicide vest detonated himself in a busy coffee shop in the new Baquba area. With limited ability of local ISF units to deter ISIS raids across much of rural Diyala, the present environment of approximately three attacks within the city per day is expected to continue for the foreseeable future. Further north, Peshmerga units remained on the defensive in the liberated territories of Sinjar and Tal Afar, repelling ISIS assaults on 16 and 17 of January with the support of coalition aircraft.

A reduction in ISIS activity across Anbar gave way to multiple ISF counter-offensives this week, largely within vulnerable positions such as Fallujah and Rutbah town located away from the main concentration of ISIS forces. In Fallujah, this offensive took the form of tribal-led clearance operations in the Jaffa and Nuaimiya areas of the district, resulting in as many as 35 militants killed and confirming previous reports from local commanders of a massing of tribal recruits to recapture the city. Coalition aircraft are also believed to have been active from 14 January in efforts by the Iraqi army to re-establish control of villages west of Al Qaim, in a direct bid to stem the flow of ISIS weapons from Syria and mitigate the risk to border checkpoints. Initial reports suggest that both operations encountered successes, though Fallujah remained firmly under ISIS control at the time of writing. An effective stalemate was also reported on the Hit and Haditha frontlines west of the capital, most likely as a consequence of limited resources on both sides, after massed ISIS attacks of the previous week.

Armed attacks rise in Babil and Basra’s east Qurna. Threat to oil and gas facilities unchanged. In both cases the incidents appear to have occurred as part of a coordinated campaign of violence instigated on the 14 and 15 January respectively, though only in the case of Babil is militant involvement suspected. Long identified as a strategic launch-pad for attacks on the capital, Babil’s northern districts of Mahawl and Misiab saw multiple shootings and IED activity this week, culminating in a motorcycle-borne explosive on 17 January in which four civilians were killed. While ISF units continue to actively intercept militant bombing plots, raiding suspected IED warehouses repeatedly in recent weeks, the province’s location, not 30km from the ISIS front line, has meant that full eradication of the militant threat is unlikely to be achieved while security in Baghdad and southern Anbar remains in a state of flux. Close to the southern oilfields of Basra, a number of hand grenade and intimidation attacks against local houses were also reported this week, most likely incurred as a consequence of local tribal and political disputes. 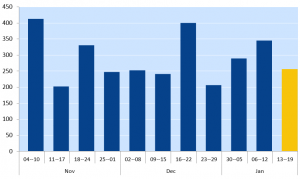