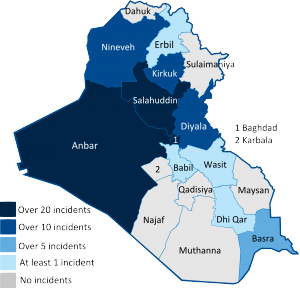 The United States offers April date for Mosul offensive as use of foreign military hardware is increased across Iraq’s western battle zones. Announced to the international press on Thursday 20 February (and confirming details reported by EI in December 2014), the United States has committed to training a joint Arab-Kurdish force, including divisions of former Mosul residents which will be deployed to liberate Iraq’s second city within the next two to three months. While not providing any fundamentally new information on logistics of the operation (US decision makers have yet to fully endorse the presence of commanders to oversee airstrikes on the ground), the announcement has now effectively committed the US administration to a ground assault against ISIS in Mosul, and is likely to have been delivered in order to counter pressure from critics that airstrikes alone will not be able to reverse the propaganda or tactical strength of the Islamic State of Iraq and al Sham (ISIS). Nationwide, heavy fighting in conflict areas of Baghdadi north of Hit, Tikrit and along the ISIS-KRG frontier continued, amid an overall reduction in militant attacks, following the intense battles of the previous week.

The arrival of militia reinforcements has intensified the battle for control of Tikrit and Baiji this week, with limited movement recorded on the Hawija, Mosul or Sinjar fronts. Among the major developments to occur was the initiation of combined operations around Tikrit from 19 February onwards, resulting in heavy shelling of ISIS-controlled areas south of the city, offering the potential for another ISF territorial acquisition, following the recapture of northern Diyala with the assistance of PMU support last month. With ISIS units unable to push back Peshmerga fighters in either Sinjar (18 Feb), Makhmour (18 Feb) or Kirkuk (23 Feb) thanks to coordinated support from coalition airstrikes, militants are expected to put up a strong resistance against their remaining northern cities in order to avoid being hemmed in by the ISF’s northward advance. Consequently, security conditions around disputed areas such as Baiji and Baiji refinery remain extremely volatile, with local units reporting heavy shelling and VBIED attacks against ISF posts, resulting in at least one fire breaking out within the facility’s bi-products processing area.

The mortar threat to Abu Ghraib and northern Baghdad has fallen substantially from the previous reporting period following ISF operations to push back the operational reach of ISIS fighters. In the Taji area 15km north of the capital and Amirat Fallujah to the east, Iraqi army teams conducted multiple sweeps and aerial raids against suspected ISIS positions, with rocket-affected districts of Baghdad including Shula, Kadhamiya and Ghazaliya all reporting a suspension of IDF fire following the major strike on 14 February in which three civilians were killed. Since 15 February, US military attack helicopters are also understood to be conducting operations in Anbar, and represent the most likely explanation for a series of reported helicopter sightings over ISIS-controlled areas of Fallujah this week. With armed conflict falling around Abu Ghraib and Mahmudiya, militants attention was instead occupied with the ongoing battle for control of the disputed town of Baghdadiya, where a protracted siege of a government-controlled residential complex, recorded in last week’s report, was finally lifted on 21 February after almost a week of repeated attempts by the ISF to push back ISIS fighters. In total over 50 people, including civilians were killed in the battle, with at least 45 people believed to have been burnt to death by the militants, when they overran Baghdadi town earlier last week.

Armed attack against Basra PSD convoy occurs amid limited change in the southern security environment as ISF units continue to launch sweeps in all governorates. According to local sources, the incident occurred at approximately 6pm on Friday 20 February when gunmen riding motorbikes sprayed a three-vehicle convoy with bullets, resulting in superficial damage to the security vehicles. At present the organisation of the victim, believed to have been acting in support of the oil and gas industry near to Qurna where the incident occurred has yet to be identified, though police have indicated that no casualties were sustained by the PSD team. Low level violence, including targeted shootings and tribal conflict, occur on a regular basis across Basra and the south, although attacks on PSD teams remain exceptional and are more likely to be motivated by local grievances, particularly pay and employment issues from foreign companies, than militant ideology. Increased use of US Apache Helicopters across the militia-dominated governorates of Babil and Karbala may also serve to increase the risk of IDF fire in the coming month, following statements released by the Iranian-backed Kataib Hezbollah PMU the group would be prepared to deploy “advanced air defence weapons” against all helicopters suspected of supplying ISIS fighters, a long running theme of the groups’ anti-American propaganda. 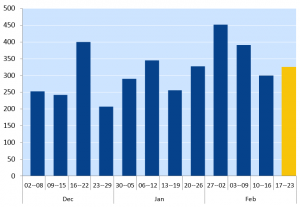