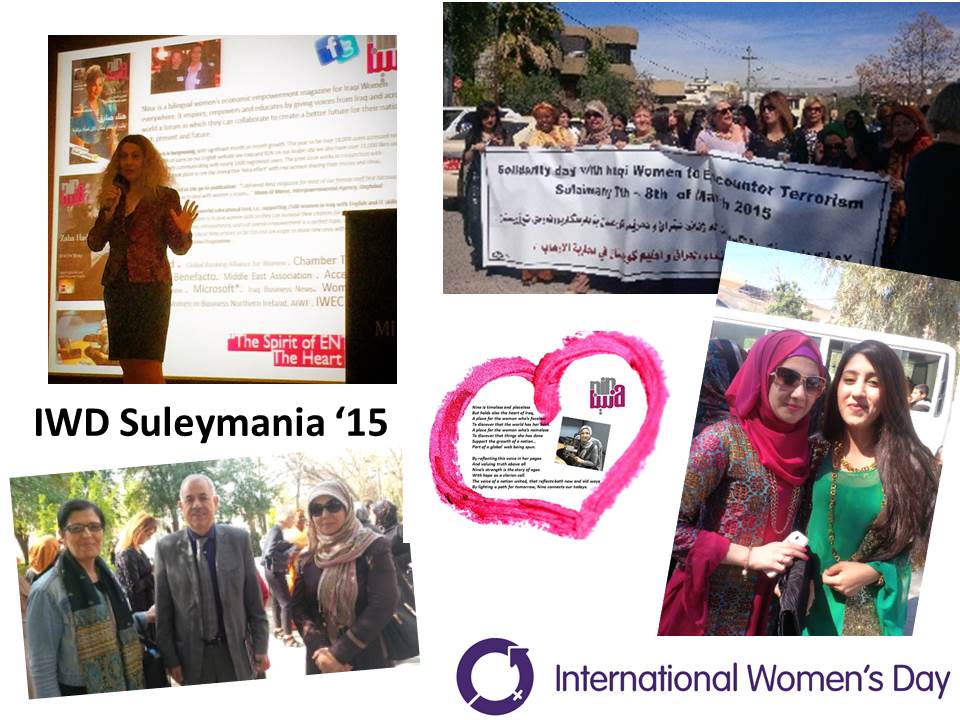 By Madeleine on 12th March 2015 in Madeleine White

Key stakeholders, including the Municipality of Suleimania, the University of Suleimania, Chamber Trade Sweden, Nina Magazine  and many others sent a strong message of collaboration and support to all Iraqi women on March 8th Women’s Day.

A two day event held at the Grand Millennium Hotel culminated with a March through the streets of the city. Over 300 delegates enjoyed discussion grounds and presentations which included information about trafficking, women’s health and international media perspectives.

International delegates also contributed to the wider discussion points, offering perspectives from their own countries:

In a powerful closing speech Charlotte Kalin, CEO of Chamber Trade Sweden shared three key messages, which had come out of the discussions throughout the two days:

“IWD here in Suleimania was so important for all of us younger women because it created greater awareness amongst us about the problems that women in our community suffer from. We discussed health, economic empowerment and trafficking and found out what we could do to help combat issues. It was also a reminder to everyone that both women and men are human -  and our humanity is at the heart of everything. ”

At the end of the march, a young woman from Kobane spoke movingly about their need to understand that women from across the world were with them. That they were not fighting ISIS on their own, but instead from within a community of powerful l allies. Nina was created to allow shared messages of hope, inspiration and strength to cross barriers of language and physical borders. Let us hear her call as a rallying cry to support each other, wherever we are.

For more pictures go to http://nina-iraq.com/2015/03/12/a-message-of-hope-and-support-from-suleimania-on-international-womens-day-2015/