As Iraqi sovereignty increased, so did Iraqi efforts to lead the charge to free market success, but the challenge of jump starting state enterprises has dogged the Ministry of Minerals and Industry: with the oil price collapse, the effort has taken on new urgency. That’s something we found at the state run cable factory in Nasiriyah (picture: medium voltage cable rolling at the site) which had recently secured investment from an Iranian company, Abhar Cable & Wire Co. as a part of ongoing initiatives to part privatise these companies. 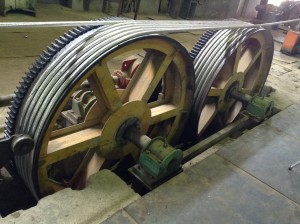 The director was bullish after the new deal with the Iranians, and confident of more foreign involvement:

“In 2003 the state faced very dramatic changes but we have cooperated with the investment commissions and imported new machines, and have maintained existing equipment to increase output from 9100 tonnes to 20,000 tonnes a year.”

It’s true that the factory floor did have some relatively new equipment, and while some was previously purchased from Iraq’s old friends in the German Democratic Republic (not so new) the machines were humming away to meet a huge order from Iraq’s Ministry of Electricity, no doubt one of many to meet Iraq’s growing power needs.

16 Responses to The Foundations of Thi Qar