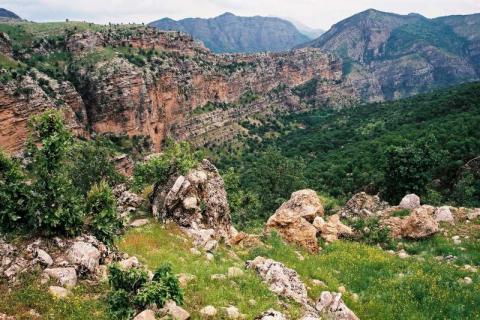 Kurdistan in 10 Years: The Future For the Kurdish, The End of Iraqi Borders?

As Turkish voters went to the polling booths, Iraq's Kurds were watching eagerly. The result, which saw the pro-Kurdish Peoples’ Democratic party, or HDP, win enough seats to enter the Turkish Parliament and, in effect, give them the potential to act as kingmakers as the next government is formed there, made Iraq's Kurds happy too.

The HDP, a left leaning coalition made up of Kurds and liberals, managed to get past the 10 percent threshold for entering parliament, achieving more than 12 percent of the vote and around 80 seats in the 550-strong Turkish Parliament.

The entry of Turkey's Kurds into the serious political fray will further impact the cause of Kurds in Turkey and in the region in general over the next decade. In fact, despite all of the conflict and crisis in the Middle East, some might even go so far as to suggest that the Kurds in Syria and Iraq, and now Turkey, are making the best out of a number of bad situations. In Syria and Iraq, Kurds are reaping the benefits thanks to instability and war; in Turkey, they are benefiting from democracy.

And the bloody conflicts in Iraq and Syria don’t look likely to end anytime soon – which makes Kurdish analysts believe that Kurdish power in the region can only continue to grow.

While chaos reigns and bombs drop throughout the rest of Syria, the Syrian Kurdish region in the north east of the country called Rojava was holding local council elections.

There was a very high voter turnout. The people in this area also apparently approved of a new set of personal status laws, which differ from those in effect in the rest of Syria; the laws in Rojava are pro-women, granting both sexes equal rights, amending inheritance laws and banning polygamy.