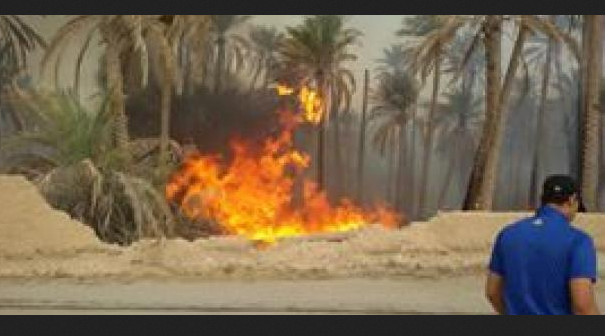 By Editor on 4th July 2015 in Agriculture, Security

The Mysterious Fires of Wasit: Arson Being Used to De-Stabilize Iraqi Farms?

A recent rash of farmland fires in Wasit province has seen accusations go flying. Is the arson politically motivated? Or do farmers really leave their shisha pipes unattended for too long?

Ali Tawfiq goes to visit his family's fields almost daily. He stands there and looks at the charred remains of what was once his daily work. He says it was shocking when he saw the palm trees burning and he believes that the fire was set deliberately.

And he is not the only one, he says. “Almost a dozen fields have been set on fire,” the 30-year-old local told NIQASH. “We don't have a definite answer as to who might be behind these acts or what their reasons are for burning our property. But we've heard that there are probably political reasons.”

There are fires like the one that claimed Tawfiq's crops started every month or two. And it seems that the arsonists are setting the fires to take advantage of the wind; they set the blaze so that the wind will carry it and destroy as much as possible.

Last week several major fires broke out in Badrah, around 200 kilometres southeast of Baghdad, with authorities estimating that about two hectares of land were burned. Badrah used to be famous for its dates. Local civil defence teams, together with local people, were able to put out the fires relatively quickly and before they reached neighbouring lands.

“The fires in Badrah are not accidental,” says another local farmer who wanted to be known only as Abu Hassan and who is in his 50s. “The way the fires are being set is systematic and they are being set by unknown people. I wouldn't be surprised to hear that a fire was set on one side of one orchard and then also on the other, to ensure the most damage.”