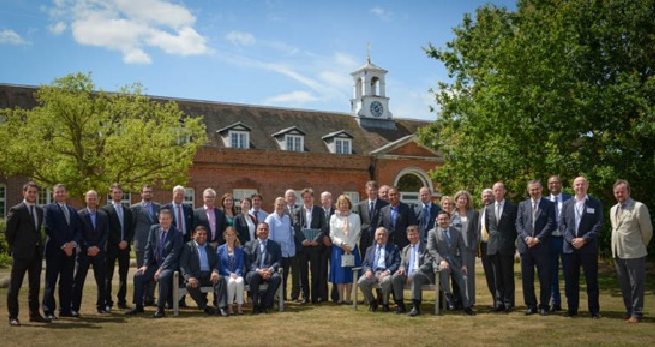 Members of the Iraq Britain Business Council (IBBC), leading political figures and experts gathered in the tranquil setting of Cumberland Lodge, Windsor Great Park, at the weekend for the IBBC's annual retreat.

The weekend was spent holding discussions and talks on different aspects that affect doing business in Iraq.

The event opened on Friday evening with a dinner followed by an address by Simon Pearce, Company Secretary of the Financial Conduct Authority, who spoke about the importance and challenges of financial regulation.

Next day a lecture from Professor Toby Dodge of the London School of Economics (LSE) laid the backdrop of how Iraq has reached the point it is at.

It was followed by discussion between the former UK Security Envoy to Iraq, General Sir Simon Mayall, the Head of the Foreign Office ISIL taskforce, Mr Dan Chugg, Mr Khalid Mahmood MP and Ms Lise Grande, the Deputy Special Representative of the UN Secretary General in Iraq. Members were treated to a frank analysis of the current goings-on in Iraq and how these came about but, more importantly, how these can be addressed.

The theme of the conference turned to vocational education with the Principal of Bedfordshire College Dr Ali Hadawi. The session described ways in which the Further Education has the capacity to empower what he termed a ‘second-chance mechanism’. Dr Hadawi stressed that education is key to investing in human capital as it is fundamental to creating and sustaining livelihoods for individuals and for making a country an attractive business opportunity.

Drawing on Dr Hadawi’s talk, Mr Vikas Handa, MD for EMEA at Weir Group, spoke about his firm’s vocational training initiatives to train and empower Iraqis. Mr Tim Luft, Co-founder of WOOTE, spoke about how rapid technological change was driving a revolution in training programmes. Virtual reality headsets, for example, allow for cheap, efficient and effective immersive training that cuts the time and cost required to create a skilled workforce.

The event continued with a session on ‘Nurturing an Alternative Media Discourse in Iraq’. Mr John Ray, former Middle East Foreign Correspondent for ITN, Mr Nicholas Pelham, Middle East Correspondent for The Economist, and Mr Faheem Ahamed, CEO of Lapis, gave different points of view on the difficulty of covering the news in Iraq, the way in which the dominant media narrative has been dominated by the paradigm of security, and how this neglects other aspects of the society that are key to have a more balanced perception of the reality.

The final panel of the day discussed the practical and thematic considerations for an IBBC conference to be held in Basrah in early October 2015. Members from Shell, HWH Associates, Basrah Engineering Group, ExxonMobil, Moby Group, GardaWorld, Perkins+Will, Stirling Group, G4S, and many others participated in the discussions.

Attendants were treated on Saturday evening to a lecture on Sumerian tablets found in a recent archaeological discovery in Southern Iraq by Professor Eleanor Robson of University College London (UCL) and the British Institute for the Study of Iraq.