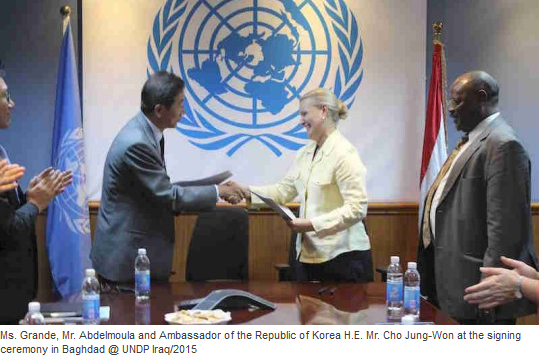 The Government of the Republic of Korea and the United Nations Development Programme (UNDP) signed a $1 million partnership agreement to support stabilization and recovery in areas liberated from control of the Islamic State of Iraq and the Levant (ISIL).

With the aim of helping improve conditions in highly sensitive areas and laying the groundwork for the return of people displaced by violence, FFIS is being used to finance key public infrastructure including clinics, police stations, water facilities, power grids, government buildings and access roads.

Short-term employment through public work schemes is being provided to local households and returning families, and small grants are being given to businesses to jump-start local economies. A special component of the Facility provides micro-credit grants to community organizations working on reconciliation.

“Stabilizing areas newly liberated from ISIL and helping displaced people return safely and voluntarily to their homes are top priorities in Iraq. Our aim is to move as quickly as we can with these initiatives so that we can help normalize conditions in some of the country’s most sensitive areas.”

H.E. Mr. Cho Jung-Won, Ambassador of the Republic of Korea in Iraq, said:

“Iraq is witnessing one of the world’s biggest humanitarian crises today.For that, the Republic of Korea is keen on supporting the efforts of the Government of Iraq and the United Nations to help recover and stabilize the local communities affected by displacement and violence.”

UNDP’s Funding Facility is currently supporting the Government’s stabilization initiatives in four key Governorates, and is seeking $70 million in funding.