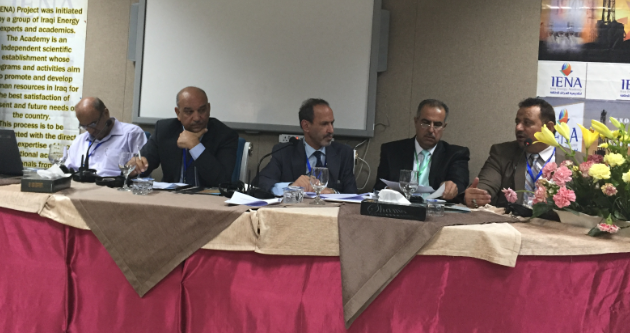 The Iraq Britain Business Council (IBBC), in partnership with the Iraq Energy Academy (IENA), held a successful conference ‘Basrah: Open for Business’ at the Shams Al Basrah Hotel on the 5th October 2015.

Baroness Nicholson of Winterbourne, Executive Chairman of IBBC and UK Trade Envoy for Iraq, HE Dr Ibrahim Alolom, Founder of IENA, and Mr Akeel Al Khalidy, Chairman of the Investment Committee of the Basrah Provincial Council welcomed the audience before opening sessions on Oil and Gas, Water, Training and Environmental Challenges in the region.

The Oil and Gas Sector Update was given by IENA’s Dr Sabah Al-Jowhar and Dr Ishan Al Attar. Their presentations gave insights on the future vision for gas utilisation and a successful programme on investment and privatisation for the sector.

Mr Hussain Ali of the South Oil Company spoke on Water Injection in the South of Iraq in a session chaired by Prof Dr Ali Mashat from IENA. Dr Sadik Aljawad, IENA, followed with a presentation on a new water strategy for Iraq.

The conference finished by remarks from Eng. Rasmi Al Jabri, IBBC Representative in Iraq, followed by a speech by Baroness Nicholson of Winterbourne.

IBBC and IENA signed a Memorandum of Understanding in 2013 and have ever since cooperated in a number of activities.