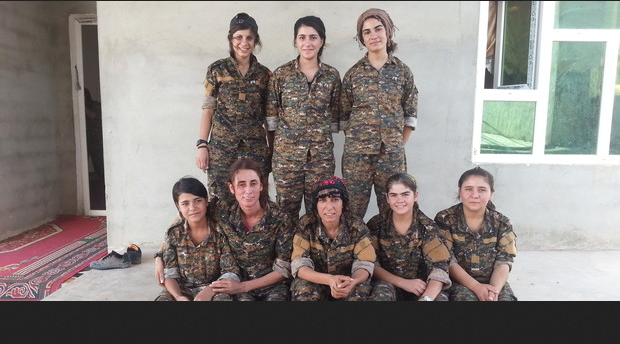 By Editor on 1st November 2015 in Security

Not Just Boys and Make Up: Iraq's Yazidi Women Learn to Defend Themselves, Change Culture, One Girl At a Time

A special military unit of Yazidi women in northern Iraq is seen as praiseworthy. But what the female soldiers are learning there goes against much of what Yazidi society wants from its female members.

“The purpose of this centre is to provide a place they can get together and where they can get military training and some education,” says Hazel, a 35-year-old Yazidi woman overseeing a group of other Yazidi women in the Sinjar area, in northern Iraq.

These women are some of the lucky ones – thousands of members of their ethno-religious sect, whose traditional home is in this part of Iraq, were captured, killed or displaced by the extremist group known as the Islamic State, last August. But they managed to escape or were never captured at all.

Most of the women building the centre – mixing cement and placing bricks – have come from nearby camps and many have brought their children with them. The atmosphere is lively and good humoured.

The building of the centre is being organised by members of the militias known as the Sinjar Resistance Units, who are defending Yazidi territory from the Islamic State, or IS, group – they are being guided in this by militias from the Kurdistan Workers’ Party, more commonly referred to by their Kurdish acronym, PKK; the latter is a military organization fighting for Kurdish rights in Turkey designated as a terrorist group by some countries.

Under the auspices of the PKK, a special women's section of the Sinjar Resistance Units was created early in 2015 with the assigned purpose of protecting Yazidi women.

Even though the Yazidis are traditionally a patriarchal society with very strict customs around women's roles, many of the Yazidi women here are now being trained by the PKK fighters, who have a totally different kind of philosophy about what women can and cannot do on a battlefield, and in fact, in society in general.