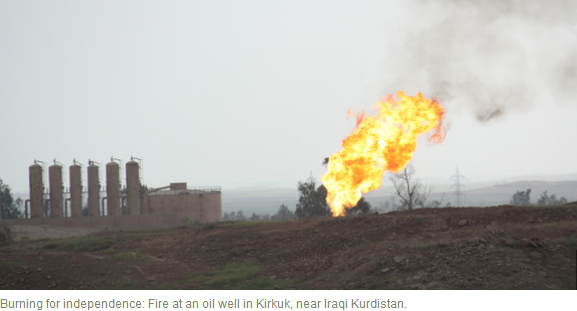 During two meetings the senior Iranians asked that the Iraqi Kurdish reconsider their independent oil exports and discuss it with Baghdad again, according to a statement published by the Iraqi Kurdish government afterwards.

In his first public appearance upon returning from the conference, Barzani said he was ready to go back to the negotiating table in Baghdad.

Meanwhile in Baghdad, the draft of the federal budget for 2016 also sets out a number of conditions for Iraqi Kurdistan's oil.

“During past negotiations, Baghdad wanted Iraqi Kurdistan to fulfil certain conditions before it would send the region its share of the federal budget,” explains MP Ahmed al-Haj Rashid, the rapporteur for the Iraqi Parliament's Finance Committee in Baghdad.

“Those conditions were reasonable. However the conditions in the 2016 budget are tougher. There is a strong possibility that an agreement will not be reached,” he told NIQASH.

Iraqi Kurdish officials are returning to Baghdad to negotiate because they are under pressure, a senior Kurdish source working in Baghdad told NIQASH; the source could not be named because they were not authorised to speak on the matter.

Iraqi Kurdish officials had signed deals with several oil companies and the source believed these contracts should be honoured. However the source also thought that if the contracts were presented in Baghdad, the Iraqi government would never accept them because of the way the deals were done.

“They will discuss the issues around oil and the budget but the negotiations won't succeed,” the official predicted. “Even if they do come to some kind of agreement, nothing will happen – there can be no tangible results.”