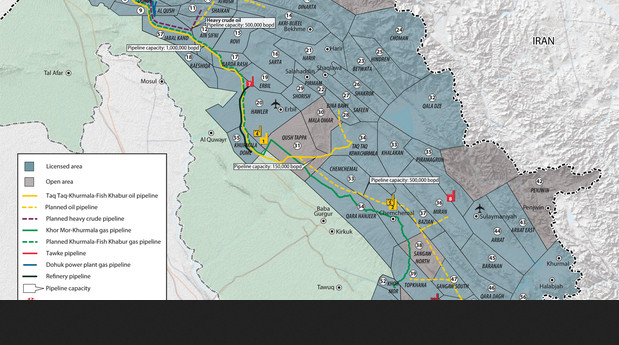 A Pipeline In The Pipeline: Can Exporting Natural Gas Save Iraqi Kurdistan?

Beginning 2016 Iraqi Kurdistan will begin to build a new natural gas pipeline to Turkey. But analysts say if they use the same policies they do for oil, the pipeline will make things worse, not better.

Thanks to recent geo-political conflicts, the oil pipeline between the semi-autonomous region of Iraqi Kurdistan and the region's neighbour, Turkey, is becoming more important than ever. And this in turn has apparently made both Turkey and Iraqi Kurdistan decide to build a gas pipeline too.

Officials from the two capitals, Ankara and Erbil, have been discussing building such a pipeline to bring gas from Iraqi Kurdistan to Turkey, and then from there, onto Europe, for some time.

Turkey is increasingly concerned that the Russians will stop supplying them with gas, given the latest conflicts between them after Turkey shot down a Russian fighter jet in a disputed area. And Iraqi Kurdistan continues to labour under Iraq's financial crisis; the region desperately needs new sources of income.

The Iraqi Kurdish Ministry of Natural Resources note that their region contains around 3 percent of the world's reserves of natural gas. If the Kirkuk region, currently under the control of Iraqi Kurdish military thanks to the security crisis, is eventually annexed to the Iraqi Kurdish region too, then that number jumps to 6 percent. Given this huge amount of natural gas and the current political and economic crises, a gas pipeline looks like an increasingly useful and lucrative project for both parties.