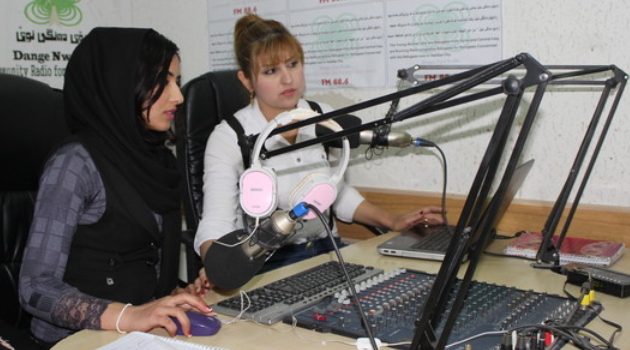 By Editor on 8th May 2016 in Iraqi Communications News, Security

Four displaced women from Iraq and Syria, now based in Halabja, Iraqi Kurdistan, are running a radio show for other displaced people in the area.

Four displaced young women are making waves in the northern Iraqi city of Halabja – radio waves, that is. The four women run a radio show that is broadcast on the socially-conscious Dange Nwe, or New Voice, radio station, that’s called “By The Displaced People, For The Displaced People”.

The show is broadcast every day between 8am and midday and includes news broadcasts as well as information from the camps around Halabja, where an estimated 6,000 displaced Iraqis and Syrians now live. And the show is multi-lingual, using Arabic and Kurmanji, a variant of the Kurdish language commonly used in Syria.

“We present the news once every hour in both languages,” explains Hevy Izat Ahmed, one of the girls working for the radio show. “Then the other parts of the show involve special reports on displaced people and what’s going on in various Iraqi and Syrian cities. The people on our shows are the displaced people themselves. We want to make sure their voices are heard.”

Ahmed is herself displaced – she’s originally from Kobani, a Syrian Kurdish town, and she’s only been in Halabja for a year; when she reads the news, she does so in Kurmanji.

Hanine Hassan, who is originally from Fallujah further south in Iraq and who has been in Halabja for two and a half years, presents her broadcasts in Arabic. “I often get messages from displaced people in Halabja where they thank me and also suggest new ideas for programmes,” Hassan told NIQASH. “I find that very important because it indicates they are listening to us.”

Hassan says she’s hoping to establish something similar in Fallujah when she returns home, although she worries about how to fund it and whether radio journalism can provide her with a decent living. Currently the costs of the radio are covered in various ways, with revenue from advertising and by contributions from an Iraqi-German NGO, Wadi, long time supporters of the station.

“The people of Halabja respect the displaced people because they themselves have been through so much,” says Suzan Yahya, another of the women working for the show. Her family came from Syria almost three years ago and was one of the first to arrive in Halabja. As such, they stayed in the city in rented accommodation rather than in a camp and they now consider themselves part of the community.

“My task is to communicate the problems and suffering of the displaced people here,” says Layla Mohammed, who is also originally from Syria. Mohammed says she often visits a displaced people’s camp in Arbat, east of Sulaymaniyah, to prepare her reports there. The main problems for them now are lack of water and fuel and poor roads, she notes.

Currently the new radio show is getting a lot of attention. However it is also clear that because the shows are broadcast in languages unfamiliar to the Iraqi Kurdish locals, the station as a whole doesn’t do so well with local audiences during the hours of the displaced people’s show.

However as Rankin Salam, the director of Dange Nwe, which has been operating since 2005, explains, the work that the women are doing promotes peaceful co-existence in Halabja, a city which has suffered a lot and which was named the “Capital of Peace” by local authorities in September 2014.