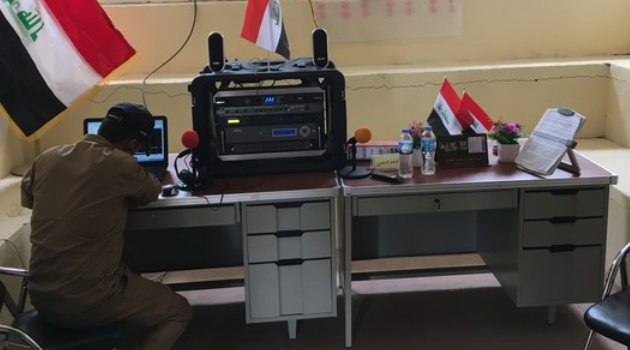 By Editor on 14th May 2016 in Iraqi Communications News, Politics, Security

Taxi driver, Nawzat Mansour, is fiddling with his radio, trying to get a signal in Makhmour, a town on the frontlines of the fight against the extremist group known as the Islamic State in northern Iraq.

The 32-year-old tells NIQASH that every day he listens to a local radio station, known as Imam Radio, for a few minutes. “But most of the time they just talk about jihad [holy war],” he says. “They keep saying that the Iraqi army and the Iraqi Kurdish military are infidels. But nobody really believes them,” he notes.

Imam Radio is broadcast out of nearby Islamic State-held territory and is the extremist group’s latest propaganda ploy in the run up to what everyone believes will be the battle for the nearby city of Mosul, an extremist stronghold in the area.

Mansour, who lives in Makhmour, keeps searching for another station. There are other local radio stations, one of which is run by the Iraqi military, who are trying to compete with the Islamic State, or IS, group on local radio waves.

“Imam Radio’s signal is stronger than the army’s,” Mansour concludes. “But we heard that the army is going to try and improve its signal, especially as the date for a final attack on Mosul comes closer.”