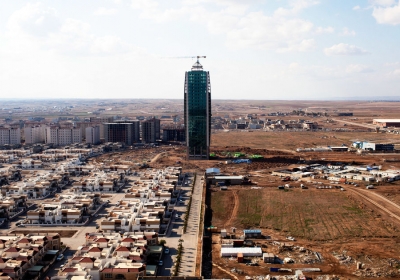 Last November I was back at the American University of Iraq’s Institute of International and Regional Studies in Sulimaniyah, researching a report on the KRG’s latest economic reform initiatives. I was surprised to find that the KRG now has some promising programs underway to increase revenues and cut expenses. Given the dire state of the regional economy, this is an important development.

Readers of my research on “Kurdistan’s Great Recession” (available here ) will recall that Kurdistan is now in the midst of an unprecedented economic downturn. Following the cutoff of payments from Baghdad to the Kurdistan Regional Government (KRG) in the first half of 2014, its budget was subsequently dealt a mortal blow by the 2014 crash in world oil prices, which fell by over 50% in the second half of that year.

The resulting collapse in KRG revenue led to an abrupt reversal of the rapid growth the region had previously enjoyed and left it in a state of crisis from which it has yet to emerge.

Erbil’s response initially seemed to consist mainly of making ends meet by not paying its bills. Over the last year, however, the budget deficit is increasingly being considered in the context of a long-term effort to reform Kurdistan’s state sector. By this point, the KRG has eliminated most of its former refined product subsidies, thereby making more barrels of oil available for export.

Last October, it began a biometric registration program for state employees with the goal of reducing fraud and abuse in the disbursement of public-sector salaries. It is also moving toward a more rational and efficient system for corporate tax collection.

While these reforms are clearly a step in the right direction, it remains to be seen how effective they will be. The removal of subsidies is already providing a significant boost to the KRG’s finances but the other two programs are just getting started and will make considerably greater demands on Erbil’s limited administrative capacity.

There may well be a considerable gap between how the new policies are supposed to work in theory and how they actually turn out in practice.

For more on this topic, check out my latest IRIS Iraq Report: “Making Ends Meet: Economic Reforms in the Kurdistan Region of Iraq.”