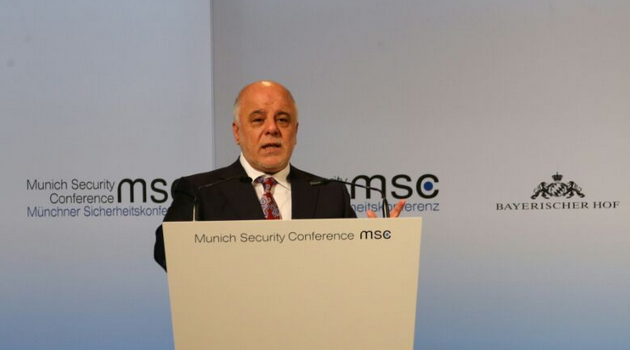 Iraqi Prime Minister Dr. Haider Al-Abadi has expressed his thanks for the international support his country has received in its fight against the Islamic State group (IS, ISIS, ISIL, Daesh).

Speaking at the Munich Security Conference, he said:

"On behalf of the Iraqi people, I extend my sincere thanks to your countries for supporting us in our fight against terrorism, especially the NATO countries and the Global Coalition to Counter Daesh, and I assure you that your support did not go in vain".

The full text of the Prime Minister's speech is shown below:

Ladies and Gentlemen,
I am pleased to be among you and to express our thanks for your support of Iraq, its people and its forces, who have inflicted the biggest defeats on Daesh.

In these moments that I stand among you, Iraq is nearing the full regaining of its territory and expelling Daesh from the last part that was under its control. We are now fighting to clear the remainder of Mosul, which is less than half of the city. After a year of successive victories we will achieve our goal and there will be no place for Daesh in Iraq, as we promised you and our people.

Ladies and Gentlemen,
On behalf of the Iraqi people, I extend my sincere thanks to your countries for supporting us in our fight against terrorism, especially the NATO countries and the Global Coalition to Counter Daesh, and I assure you that your support did not go in vain. We have liberated most of our cities and our territory, and we are achieving impressive victories against terrorism. It is our enemy and your enemy, it threatens our people and your people and kills civilians, women and children without mercy. We look forward to the continuation of support for our troops in the areas of armament, training and advice, and logistical and air support, in order to complete the task of eliminating Daesh.

The victory that we are talking about is the result of the sacrifices of our people and our brave armed forces, which assumed responsibility for the fighting on the ground.

The other reality that we always declare is that terrorism and Daesh are the enemies of the Muslims first and they killed Muslims many times more than victims of other religions, so it was necessary for the people of all religions and sects to unite against terrorism. This is what happened in Iraq where we all united - Muslims and Christians, Yazeedis and Sabians, Sunnis and Shi’is, Arabs and Kurds - because terrorism targeted everyone.

I assure you that we have taken an important step in uniting Iraqis, and today all of them are fighting side by side. For the first time the Peshmerga are fighting alongside the Iraqi army, after decades of fighting among themselves, as the former regime used military force to suppress the Iraqi people including the Kurds, Arabs, Turkmen and other ethnicities.

Also taking part in the liberation operations are local fighters and volunteers from the Popular Mobilisation, who have been absorbed into the armed forces as part of our plan to restrict arms to the state and uphold the rule of law, and they have showed their courage in defence of our land and a strong commitment to responsibility towards civilians in the liberated areas where they gave much sacrifice.

The liberation of Mosul which is taking place now is a clean battle in which we have prioritised the rescue of civilians above control of territory, and although the fighting was tough and house to house, our troops ensured the safety of citizens and their homes and infrastructure and government facilities.

Daesh have taken civilians as human shields to delay the advance of our troops and bombed government buildings, mosques, churches, schools, universities and homes, and used civilian neighbourhoods as bases for launching rockets, and systematically destroyed antiquities and museums and the treasures of the ancient civilization of Mesopotamia.

Our orders were strict and clear on the need to protect civilians and we did not shy away from prosecuting any who abused civilians or their property, and provided at the same time safe corridors for them to leave securely, and prepared several camps to house the displaced.

All of this is happening under financial and economic distress as a result of the decline in world oil prices and with the prohibitive costs of the war.
We appeal to you to help us in the implementation of the stabilisation program and restart of basic services to the liberated cities and return of displaced persons to their homes, and call on the international community to provide emergency aid to about three million displaced people, and to support rehabilitation programs to overcome the effects of Daesh crimes and remove the culture of violence and hate, and rehabilitation of oppressed women who have been subjected to torture, rape and captivity, and children who have been trained for violence in Daesh schools.

We have begun in earnest to develop political, economic, social and reconciliation reform programs for the post-Daesh stage, based on justice, equality and the rejection of sectarianism and not allowing the use of weapons outside state control, and to enable the judiciary to perform its duty in the prosecution of crimes and corruption and the protection of religious freedoms and human rights, and we have provided a set of laws guaranteeing such rights to the Council of Representatives, as well as the development of the economy and diversifying sources of national income and maximizing the resources of the state and not to rely entirely on oil wealth as before, and in the implementation of reform we face obstacles and practical difficulties and opposition from the beneficiaries of corruption and waste of public funds, but we rely on our people who support us to continue the reform process.

Ladies and Gentlemen,
We believe that security is integral, and for that we need to cooperate and extend the network of relations with the Arab and neighbouring states and all friendly countries of the world in the intelligence fields and exchange of information to dry up the sources of terrorism, along with building a network of economic relations to take advantage of the vast natural and human resources in our region, to achieve development and social justice and fight against poverty and corruption.

Our vision is clear and our position is consistent on non-interference and to resolve armed conflicts in our region peacefully and in particular the protracted crisis in Syria which has caused huge destruction and massive displacement of millions of Syrians, and we call for serious cooperation and an urgent plan to end the conflict in this neighbouring country and to spare the Syrian people from more destruction, and we support any initiative that encourages dialogue and stops the infighting and puts an end to the bloodshed in Syria.

Iraq is keen on the security and stability of countries in our region and we have suffered much from wars and the politics of axes and cannot go back to it again. Iraq will be an independent state in its decision making, taking into account the interests of its people in the present and future and is keen to establish normal and balanced relations with all countries of the region and the world.

We are at a time when we are about to end the presence of Daesh in our country and so we call for wide international security cooperation to prevent its spread to the rest of the world, especially after the escape of large numbers of recruits in their ranks and their return to their home countries in Europe, North Africa and the rest of the world, and we must increase intelligence cooperation to eliminate terrorism and exercise extreme caution from the returning fighters who participated with Daesh to commit the ugliest beheadings and genocidal crimes, because they are tools and time bombs. It is also necessary to prohibit the thought that encourages murder and terrorism, and the exclusion of the other. We declare our full readiness for security cooperation and information exchange in the fields of combating terrorism and organised crime.

We look forward with you, and with your cooperation, to a more stable and secure future, and a world free of terrorism and exclusionary thought, where our peoples and nations are blessed with peace, stability and prosperity.