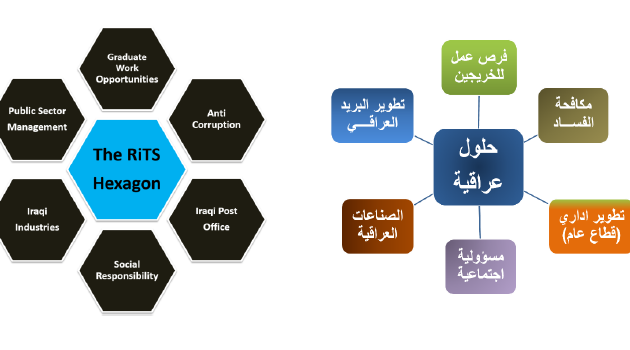 Even though Iraq is an oil producing country, it is now with 35% of its population living below the poverty line. Unemployment running at 60% among the youth sector (17-25). Almost all important social indicators places the country among the bottom 5% of countries in the world. The country has been in a continuous state of crisis for the last 35 years. The reasons for the current economic stagnation are:

Any effort to rejuvenate the Iraqi economy must involve the large scale creation of new job opportunities. Given the lack of funds available, it follows that the only means of increasing economic activities is through entrepreneurship. What is required is a massive number of entrepreneurial projects to be initiated, incubated and supported through a network of organizations dedicated to the cause of successful startups.

RiTS itself an entrepreneurial Iraqi company, having spent most of 2016 establishing Iraq’s first incubator dedicated to the graduates of Al Mansour University College. Then followed that by establishing Iraq’s first Crowdsourcing gathering, currently hosted on Linked in but shortly to go on the air as an independent self-contained resource that brings together Iraqi entrepreneurs and experienced professionals from around the world to combine their efforts, knowledge and money to support new startups in Iraq.

This initiative has already led to 2 new ventures being established. A new division within RiTS to produce 3D printed mechanical prosthetic hands for Iraqi disabled children [http://tinyurl.com/hjehpz9]. Also a joint venture involving migrant Iraqis residing in the USA to establish an offshore team of programmers established in Iraq servicing contracts with major US corporations.

In addition to the above initiatives, we have also carried out efforts to survey the Iraqi entrepreneurship scene. We followed this by holding meetings and discussions with as many players in the field as we can find. This also included meetings with relevant government entities at Ministries of Higher Education & Research, and Labour & Social Affairs.

The conclusion we reached from all these interactions is that entrepreneurship in Iraq is at its embryonic stage. The oldest initiative [Fikra Space] was only started in 2014. Today we have a number of players working in this field, but they are all working as separate islands. In order to accelerate entrepreneurship we need to create an ecosystem that integrates all efforts, and to focus all our activities on a single objective. That of creating new job opportunities. This is a simple metric that can be easily measured and helps us plan the size and timescale of our activities as individual organizations.