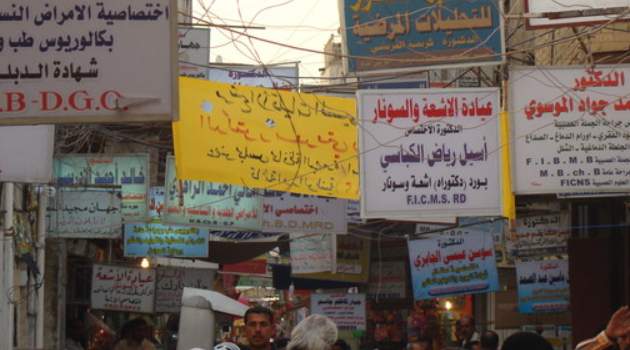 Some of the doctors have been tempted to move away, into the Saei district where there are wider streets and more modern buildings. Often pharmacies will pay for the doctor’s space as long as the doctor prescribes certain medications that the pharmacy stocks.

Doctors should actually be prosecuted for “these shameful acts”, says Mushtaq Abu al-Hail, the head of the local medical union. “We have circulated letters telling doctors they should abide by the law, which prohibits them dealing with brokers,” al-Hail told NIQASH.

“Doctors are primarily to blame for this problem,” he added. “We know the names of those using brokers and we have sent them notices to cease and desist. We are now seeking the help of local government to put a stop to this.”

At one stage, local security forces did launch a campaign to clear the streets of medical brokers after various complaints from the public. Many were arrested but were later released thanks to the influence of their tribes or families.

Meanwhile it is the evening rush hour back in Aziziyah and the brokers are quietly meandering, beginning their work. Most of them are well educated young men, glib and persuasive but certainly not kind.  It seems clear that they won’t allow anyone to stop them from making a living - not even doctors who come back from the dead.