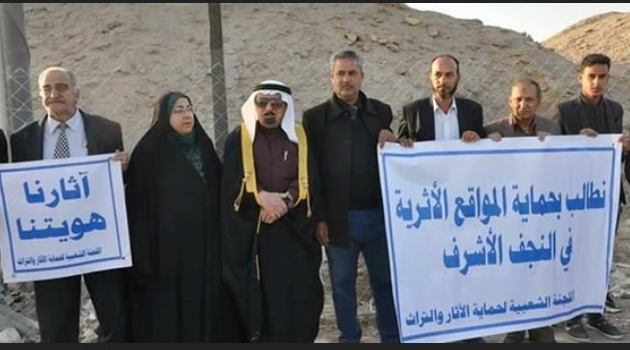 The local authorities seem unable to remedy these problems. Some of this may be due to mismanagement. For example in May 2017, Aseel al-Talaqani, the head of the provincial council’s Tourism and Antiquities Committee, admitted that the runway at Najaf airport is actually home to three sites of archaeological significance, dating back to the Manathirah era.

Mohammed al-Mayahi, head of Najaf’s department for antiquities, says that the deterioration in the ancient sites has nothing to do with the government. “It is due to the local people who are continually encroaching on the archaeological sites,” he told NIQASH. “It’s due to legal and tribal conflicts and that’s just worsened by a lack of awareness and by the attitude that many people have, that their personal interests are above the interests of their homeland.”

Al-Mayahi says that there are actually blueprints for the development of the ancient sites, with an intention to turn them into tourist attractions and cultural centres. This would happen as soon as his department gets funding for the job. “But for the time being there are no funds allocated because of the financial crisis in Iraq,” he explains.

This is why, for now, al-Mayahi believes the best thing to do is to continue to monitor any violations and try to bring the perpetrators to justice.

“They are made to pay fines and for the time being, this is the best way to solve this problem,” al-Mayahi suggests.