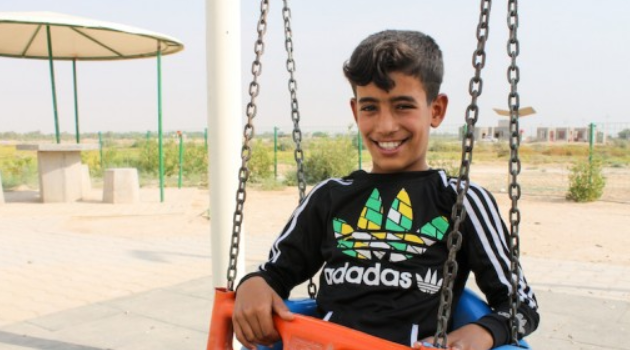 “Every day on my way home from school, my friends and I spend our afternoon playing at the playground,” said Mahdi, 11, from Al Nashwa sub-district of Basra, South of Iraq.

In 2015, and under the UNDP-Shell Partnership, four playgrounds were constructed between Basra’s sub-districts of Al Nashwa and Al Dair to provide children with a safe space to play.

After consultations with the local communities and stakeholders, the lack of safe spaces for children surfaced amongst the priorities listed that required improvement. Children’s safety was an ongoing issue amongst the communities of Al Nashwa and Al Dair.

“Our children were in danger because they were playing near the roads, which worried all the parents,” said Sa’ad, a resident in Al Nashwa.

The four fenced playgrounds provide a range of facilities such as a football pitch, swings, fitness equipment, lighting and a seated shaded area attracting both children and youth.

Balanced and active play is essential for children to thrive because it helps them to learn, grow, and develop important skills related to creativity, social connection, and leadership. In order to encourage play, it is important for children to have access to safe places within walking distance of their homes.

“We don’t have to use rocks anymore for goal posts or play in the dark on the rubble,” said Mahdi. “Playing inside the fence feels much better because we don’t have to worry about the ball rolling to the street.”

To sustain the playgrounds and promote cleanliness, the Partnership Programme also equipped the playgrounds with trash bins along with water tanks for the plants. The availability of play areas is critical to knitting communities together and helping children to interact with others, which was prevalent on the playgrounds in both sub-districts.