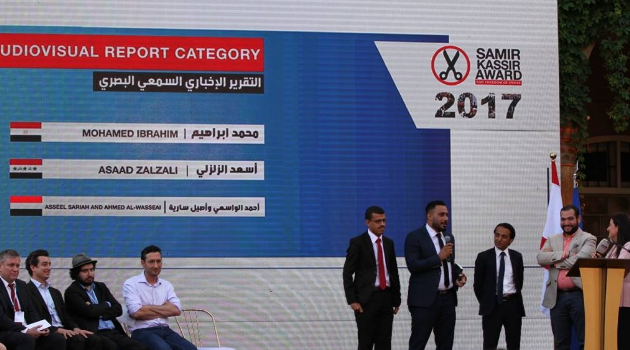 By Editor on 13th June 2017 in Iraqi Communications News, Security

Iraq's Asaad Zalzali has been awared this year's Samir Kassir Award for Freedom of the Press in the Audiovisual news reporting category.

Born in 1984, he it the general manager of Maraya Media news agency. His seven-minute news report entitled “Project No1” was aired on Deutsche Welle Arabic on 11 January 2017. It unveils a major corruption scandal in Iraq that deprived the country from much needed school construction projects because of nepotism, rogue bankers and unaccountable politicians.

The Samir Kassir Award for Freedom of the Press is funded by the European Union, and rewards journalists who have distinguished themselves through the quality of their work and their commitment to human rights and democracy. Organised every year since 2006, the Samir Kassir Award honours the memory of the Lebanese journalist Samir Kassir who was assassinated on 2 June 2005 in Beirut. The competition is open to journalists from the countries of North Africa, the Middle East and the Gulf. This year, the 191 applications that were received bring the total of participants since the creation of the award to more than 1,900. The prize awarded in each of the three categories is of €10,000.