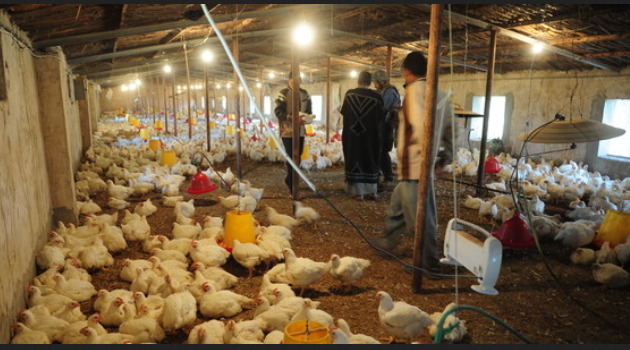 By Editor on 27th August 2017 in Agriculture

In Iraqi Kurdistan, poultry farmers are calling for tariffs on chicken products imported to the region. Otherwise, they say, the local industry won’t survive.

“It’s a simple enough deal,” says Sarhad Hama, who owns a large chicken farm near Halabja. “Local production is not enough to meet the demands of the region. But Kurdistan also depends on imported products, so we need to export our own goods to central and southern Iraq.

At the same time imported poultry products are putting pressure on local producers. Official statistics indicate that every local in Iraqi Kurdistan consumes around 25 kilograms of chicken per year. The local government says there are 350 different poultry farms in the region, producing tonnes of chicken a day.

“If we estimate that there are about 5 million people in Iraqi Kurdistan and that each of them consumes 25 kilograms of chicken a year, then we would need 125,000 tonnes of chicken annually,” says Jamal Shukri, of the local Ministry of Agriculture. “But that exceeds the maximum locals can produce, which is why we allow imports of poultry.”

Some locals say that the local product tends to be of higher quality but the imported goods are popular because they are usually sold at lower prices.