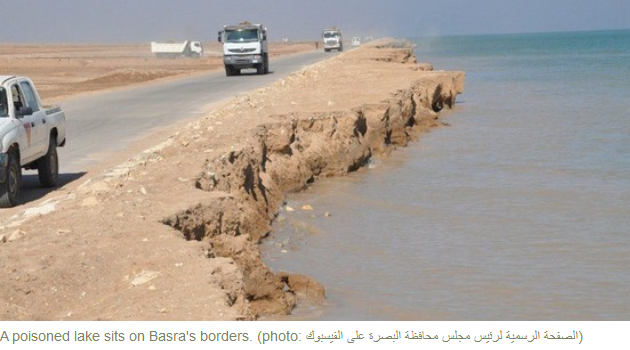 By Editor on 7th January 2018 in Agriculture

A soil barrier built to protect Basra’s farms and oil fields from polluted water flushed out of Iran is leaking. It’s the latest in a long list of water woes between Iran and Iraq.

A soil bund established to prevent the seepage of poisoned water from Iran into Iraq, in the Basra province, is starting to leak. It protects Iraqi land in Basra from a highly saline pool of water that stretches from the Shalamijah border crossing to the Majnoon oil fields.

“The damage that this lake filled with run-off could do is enormous,” says local researcher Kathem al-Ghilani. “That’s because the run off comes from private fish farms and sugar cane farms and the amount of water is huge.”

After looking at satellite imagery, al-Ghilani believes that the Iranian water comes mostly from farming. “When Iran harvests its sugar cane, it empties farms of water and this water contains fungicides and pesticides. It’s highly toxic. There is also waste water from petrochemical plants, oil refineries and Iranian plastic factories,” he explains.

Al-Ghilani says that some of this water has already leaked into Basra, via the waters of the Shatt al-Arab inlet. This is where the Tigris and Euphrates rivers meet and empty into the sea, but in recent years a reduced flow of water from the rivers has seen the salt water creep inland.

The Karun river, which flows from Iran, is another tributary to the Shatt al-Arab and it also brings polluted water from the neighbouring country. The Iranians have previously denied flushing polluted water into the Karun.

Now the potential collapse of the soil berm is causing even more concern. There are cracks in the 80-kilometre berm and the leaks stretch for 50 kilometres. Farmers have already been forced off their land by increased salinity and pollution to freshwater, and there is fear that more may be pushed out of agriculture. Land used by oil companies is also at risk.