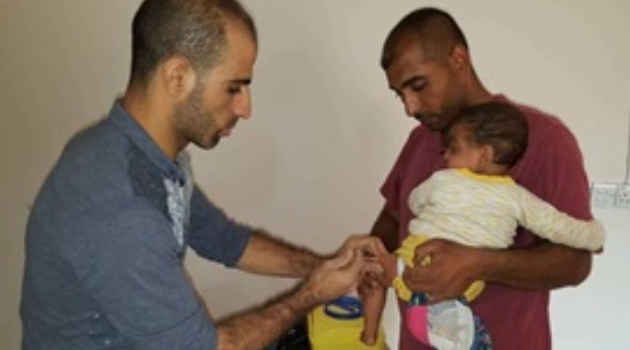 Regardless of all reports about an epidemic of skin diseases, Ministry of Health spokesman Dr. Saif al-Bader downplayed the importance of the disease, saying that "Baghdad buttons is present in Iraq but in small percentages, and it was contained by the health authorities."

Badr told Al-Monitor that the disease is transmitted through certain types of flies, blaming "the Ministry of Agriculture's weakness to control transitional diseases in farms and agricultural fields in the province."

He pointed out that the Ministry of Health's biggest challenge is the fact that IS-controlled areas have remained without vaccines. Meanwhile, 60 cases of polio were reported in neighboring Syria, which raises concern about this deadly threat spreading to Iraq.

Badr noted that the deteriorating conditions in health institutions in the western governorates have also hindered the imposition of preventive measures to limit the risk of infection.

The security crisis that led to IS' invasion of Iraq in June 2014 has created an unprecedented humanitarian and health crisis in Iraq's modern history, which requires elimination, once and for all.

(Picture: WHO vaccinations in Hawija)