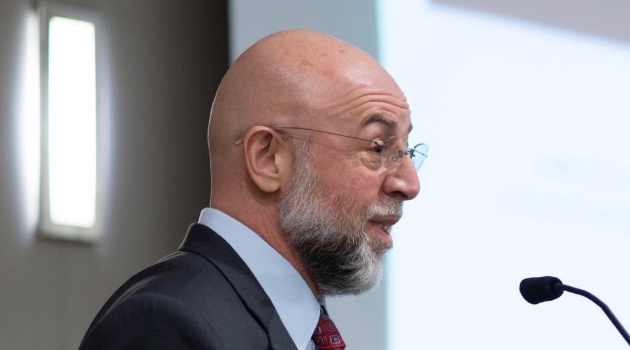 By Editor on 23rd May 2018 in Ahmed Tabaqchali, Investment

Market Review:  The Elections, the Economy and the Stock Market

A key aspect of the Iraq investment opportunity is arbitraging the delta between real and perceived risk. The perceptions of the widely covered parliamentary elections fit within this arbitrage opportunity in that they miss the mark by a wide margin.

The May elections did not result in an overall winner with an outright majority (165 seats among the parliament’s 329 seats) enabling the formation of a government. Instead, they produced winners and losers who will eventually form a coalition government. At the lead is Sairoon, a coalition of Shia cleric Muqtada Al Sadr, Communists and Liberals, with 54 seats; followed by Fateh, a coalition of the political arms of the Popular Mobilisation Units (PMU’s), with 47 seats; finally, Nasr, the Prime Minister’s (PM) coalition, with 42 seats.

The rest are made up of: five different coalitions each with 18-25 seats; four coalitions each with 4-6 seats; and finally, a gaggle each with 1-3 seats. The next step would be the formation of an alliance of coalitions that would, on the first day of the new parliament by end of June, have the largest number of seats to enable it to have a PM with a chance of forming a government. The whole process should take a few weeks but, in the past, it took a few months.

The winning coalitions, irrespective of their lead player, are all cross-sectarian unlike the prior ethno-sectarian monolithic blocs that dominated over the past 14 years – a division that was the root cause of Iraq’s political and social instability since 2003. Moreover, for the first time since 2003 there was a strong mass opposition to these ethno-sectarian monolithic blocs that manifested in an active non-participation movement. This led to an election participation turnout of 44.5%, which in turn had huge effects on the seats won and lost by the different coalitions.

Drilling further into the leading blocks shows neither they nor their leading players conform to simplistic assumptions. For example, Muqtada Al Sadr is often described as a firebrand cleric who is anti-secular, anti-Western and pro-Iran as a result of his leading role in Iraq’s dark history since 2003. Yet, at least outwardly, he went through a transformation to a firebrand cleric who is anti-Iran and anti-its proxies in Iraq, whose alliance with Communists and Seculars kept the 2015 pro-reform demonstrations alive and relevant.

Moreover, he was a leading player in rebuilding Iraq’s relationship with Saudi Arabia and the UAE - both received him in their capitals in 2017 to further this rebuilding. The second leading coalition, Fateh, a grouping of the political arms of the supposedly pro-Iranian PMU’s, although not all are, is led by Iranian-allied Bader Organization. Yet Bader has been a part of every Iraqi government since 2005, responsible for the Ministry of the Interior, and as such a major part of the next phase of Western support for Iraq in rebuilding its security apparatus in the long-term fight against ISIS.

The most visible fruit of which has been the decline of violence since the end of the Mosul campaign and in the first violence free elections (see chart below). Finally, the Naser coalition which is led by the PM and while much admired for leading the fight against ISIS, he suffers from perceptions of failure to address the demands of the demonstrators since 2015. Although an unfair criticism given the overriding priority to deal with the ISIS invasion, it was behind much of the reason for his collation’s third place showing. Nonetheless, his chances of returning as a PM capable of leading a workable government are high. 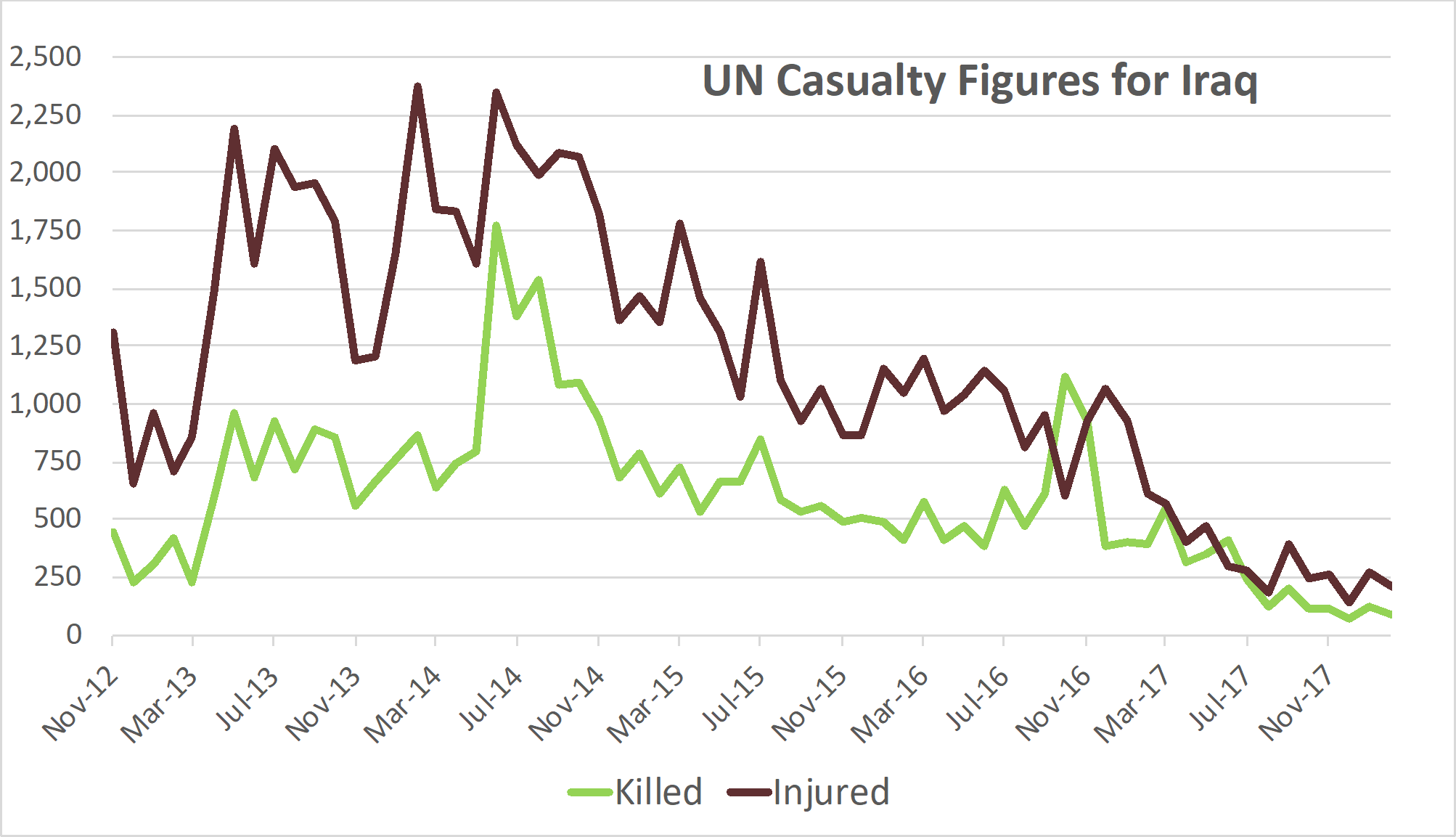 (Source: United Nations Assistance Mission for Iraq (UNAMI), for 8 months from 2015 UNAMI, in some cases, could only partially verify certain incidents)

Optimists see the potential for a coalition governing with a clear reform agenda and with a proper opposition in parliament providing a check on the government. The pessimists however see a repeat of the prior coalition governments that were made up of all groupings in parliament, and thus no real change to the failures since 2003. However, irrespective of who would be right, a few things are clear that would have implications for Iraq’s economy, the investment opportunity in Iraq and the stock market.

The combination of the lead by Sadr’s coalition, the continued pro-reform demonstrations since 2015, and the large active non-participation movement together imply that the upcoming government would need to address the issues at the heart of the public’s anger. This would be the provision of services and reconstruction, which require much needed overdue investments in the country’s infrastructure and the reconstruction of the liberated areas.

The new oil price dynamics have a huge positive implication on Iraq’s ability to provide funds for this massive investment spending estimated at USD 88bn over the next five years. Current estimates for the country’s budgets for 2017-2022 are based on Iraqi oil price assumptions of USD 45.3/bbl in 2017 and increasing to USD 47.1/bbl by 2022. These estimates would result in a cumulative deficit of USD 17.6bn, thereby increasing the debt load, necessitating borrowing to fund the deficit and restrict the ability to fund reconstruction. This implies the need for outside aid and investment to fund reconstruction.

However, different assumptions based on the new oil price dynamics would provide a vastly different picture. For instance, using realized prices of Iraqi oil of USD 49.2/bbl for 2017, and assuming Iraqi oil prices of USD 60/bbl for 2018, then declining to USD 51/bbl in 2022, would produce a cumulative surplus of USD 47.4bn instead of the earlier assumed cumulative deficit of USD 17.6bn. In other words, this equals a turnaround of USD 65bn in potential available funds.

While, an assumption of an oil price of USD 64/bbl for 2018, then declining to USD 55/bbl by 2022 would produce a cumulative surplus of USD 78.2bn, or a turnaround of USD 95bn in in potential available funds.

Granted some of this windfall will result in higher government spending, especially on populist measures which would be detracting from the funds available for infrastructure investment. Though this would nevertheless be a large positive for consumer confidence and economic activity, all of which would ultimately support the earnings profile of consumer service providers and the banking sector.

In the immediate term, given the impossibility of forecasting future oil prices out to 2022, if Iraq’s oil price was to hold the YTD average for the remainder of 2018, it would convert the IMF 2018 projected deficit of USD 9.5bn into a surplus of USD 10.9bn. This means a turnaround of USD 20bn in potential available funds. Coupled with a slight positive variance to 2019 projections, this would provide Iraq with enough fiscal flexibility to start directly funding the immediate needs for reconstruction. This changed fiscal position would further allow it to comfortably access debt markets at reasonable rates to build upon this reconstruction. The potential addition of regional investments led by Saudi Arabia, as discussed here in the past, could lead to a self-reinforcing investment cycle.

The stock market’s action in the weeks before and after the elections has been business as usual and very much followed the same themes discussed over the last few months. This is an indication of how much negative news the market has discounted over the last three years that saw the index, as measured by the RSISUSD Index, decline -68% from its 2014 peak to the 2016 bottom.

Through 22nd May the market was down -3.9% for the month, bringing the year to date gains to +5.8%. The daily market action has been almost identical to that of the prior month with the same low turnover, the same buying in the selected leading stocks and the same selling in the banks based on the same fears.

The issue that continues to dominate the market is the timing of the return of liquidity as a result of the expansionary effects of higher oil prices and the end of conflict. As discussed here in the past, the observed time lag between Y-Y changes in oil revenues and Y-Y changes in M2 has been about 7-9 months which suggests that M2 growth should see improvement over the next few months as the chart below implies: it shifts the Y-Y percentage change in M2 back by 9 months versus the Y-Y percentage change in oil revenues. However, it is complicated by the additional time taken up by pre and after elections, and the additional time needed for the formation of the new government. All of which will delay this recovery but would likely result in a large back-end loaded return of liquidity. 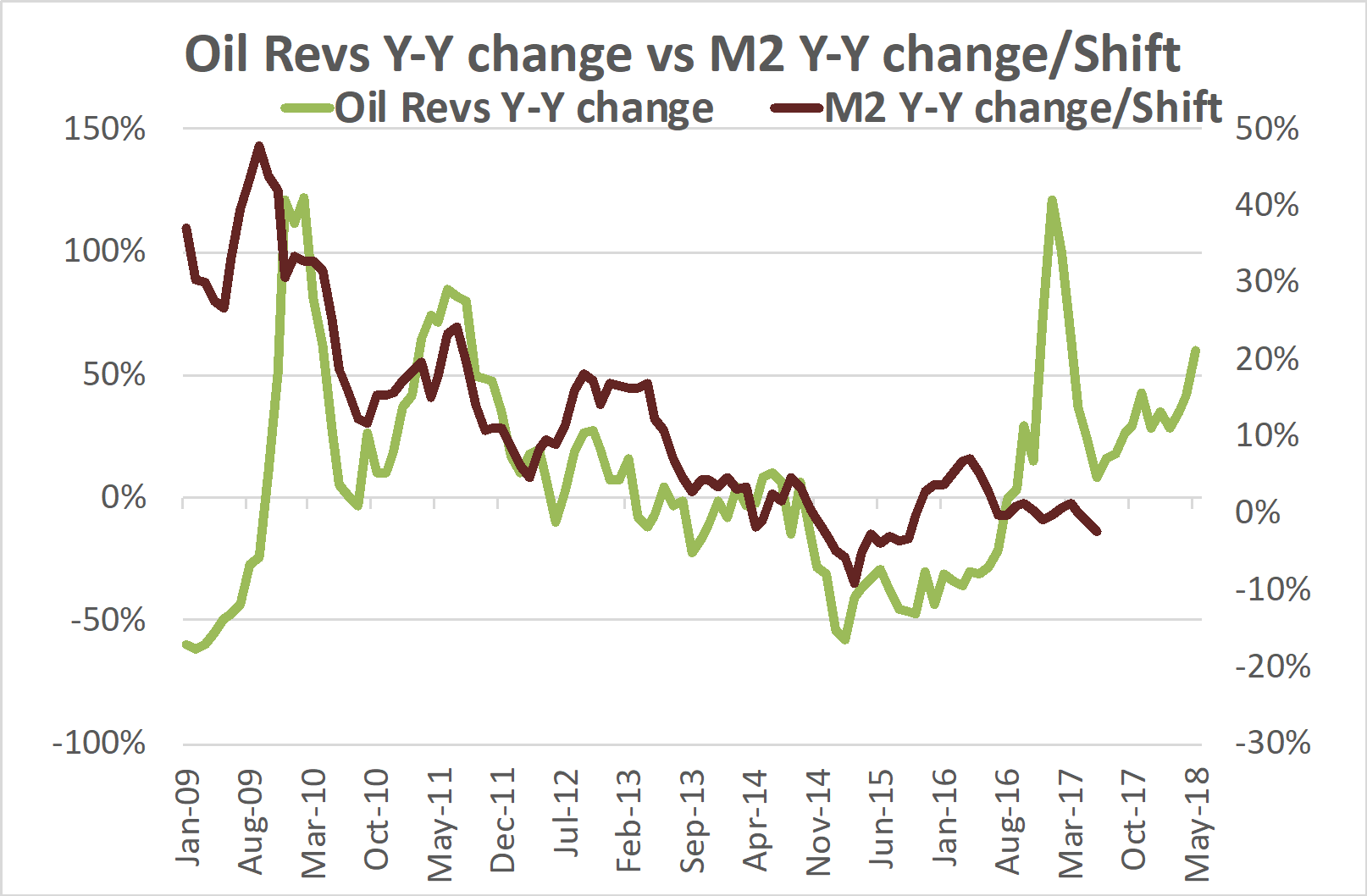 (Source: ISX Central bank of Iraq, Iraq’s Ministry of Oil, AFC.)
(Note: M2 as of Jan. with AFC est.’s for Feb & Mar, Oil revenues as of Mar with AFC estimates for Apr & May)

As argued here in the recent past, the backdrop continues to be positive: historically the equity market, as measured by the RSISUSD Index, has tended to follow oil revenues with a time lag of 3-6 months as the chart below shows. 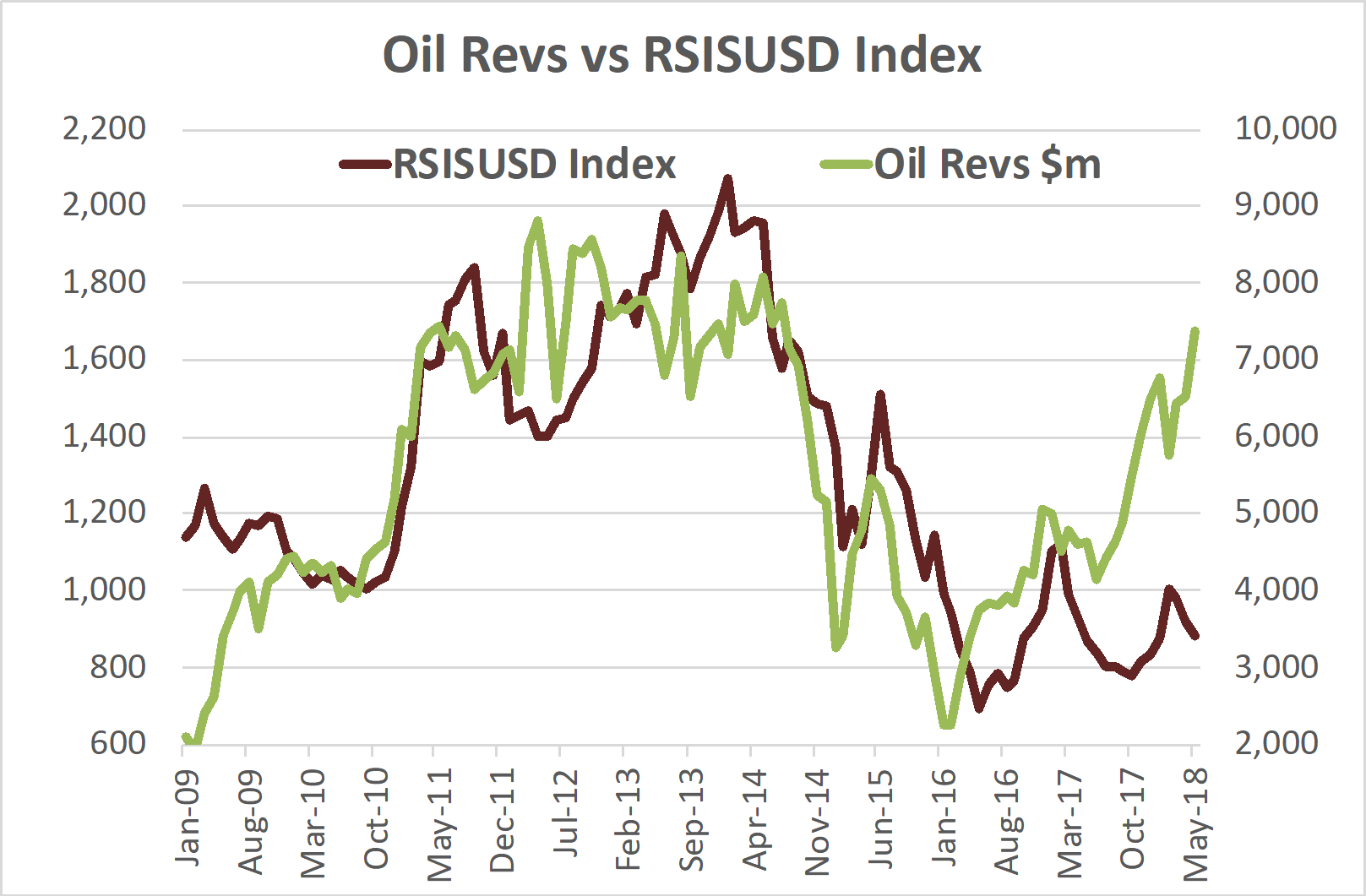 (Source: Iraq’s Ministry of Oil, Rabee Securities, Iraq Stock Exchange, AFC)
(Oil revenues are as of Mar with estimates by AFC for Apr & May)

Given the time lag involved and the delay over the formation of the new government, this will probably unfold over the next few months and the recovery will likely be in fits and starts with plenty of zig-zags along the way. This continues to underscore the opportunity to acquire attractive assets that have yet to discount a sustainable economic recovery.

[1] Source of current estimates on Iraq (deficit, oil price, revenues etc) are from the IMF Iraq Country Report No. 17/251 (http://www.imf.org/~/media/Files/Publications/CR/2017/cr17251.ashx). Updated assumptions are the author’s calculations based on the above source

2 Responses to Market Review: Elections, the Economy and the Stock Market