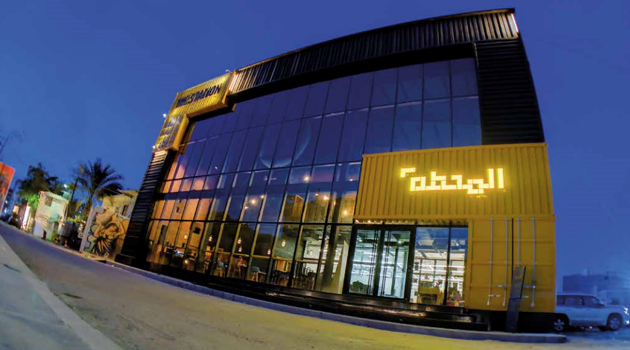 IBBC Long Read: The Station – Iraq’s the first combined workspace in Iraq, providing tech and artistic entrepreneurs with a communal space and resources to develop and expand business projects.

Located in Baghdad, The Station’s vision is to create a healthy work environment by providing entrepreneurs with experiences to develop and expand their projects. The institution aims to facilitate this entrepreneurial spirit by providing the space, support and resources to help build and develop ideas and implement them on the ground in a society which is heavily weighted towards public sector activity.

While Iraq is a middle-income country, it faces significant challenges more commonly found in low income nations. Such as a dependence on a primary commodity (crude oil), which generates 95 percent of its budget* while only employing 1 percent of the available labour force and a heavily weighted public sector, which accounts for around 60% of employment, with the government providing 40% of jobs.

This is why The Station is such an exciting initiative, it is a boost to a small but growing number of young Iraqis willing to engage and develop the private sector in Iraq. Iraq has one of the most youthful demographics in the world, with nearly half its population being less than 21 years of age.

Young Iraqis, faced either with closed avenues to public sector employment or who do not wish to conform to a status quo which does not reward entrepreneurial spirit, can find at The Station an environment which does just the opposite, facilitating a hub of ideas and resources beneficial to inspiring entrepreneurs.

Inspiration behind the Idea

The founders visited various innovative hubs/co-working spaces around the Middle East and were inspired by the activities and the economic/social impact they were having in those specific communities. They sought to replicate these spaces, but in a way that is relevant to Iraq. The co-founders are entrepreneurs themselves, and they understand the obstacles faced by entrepreneurs and small businesses. Therefore, they decided to create a space with all the facilities they believe are needed to help such an environment thrive. The idea of The Station was not merely to create a physical space but a cultural one.

Haider Hamzoz Media Director at the Station explained that: “Young people in Iraq as a whole aspire to work in the public sector upon graduation, because there have been no viable options other than that. It is not recommended to take huge risks such as investing in a business venture (unless it is a restaurant or barber shop) because there is no track record of such activities in Iraq – at least not in the last two decades. However, start-ups require risk-taking and we want to build a community of risk takers and innovators.”

The Station was founded by Mujahed al-Waisi, Muhanned Munjed and Ali Tarik. The Station has received funds from The Al-Handhal International Group and is supported by the Iraqi Private Banks League, Earthlink and the Embassy of the Kingdom of the Netherlands in Baghdad.

The Station is working towards starting an incubator program, to empower the ecosystem in Iraq. It also aims to establish and/or partner with venture capitals to fund and invest in startups, businesses and entrepreneurs. The Station also wants to be a driving force in policy advocacy through international agencies and diplomatic entities to empower the Iraqi private sector, and the role of the youth within this sector.

The Station is currently establishing its own Research and Development Centre that will offer a myriad of services, such as mentorship and policy advocacy. Activities will revolve around engaging the youth in discussions and research, not only with the private sector but with the public sector itself, essentially bridging the gap between the government and its citizens, and this is a development that ought to be celebrated because it will empower not only the Iraqi economy but its democratic institution. The Station is seeking to expand to Mosul in the next two years and has plans to develop a Station in the South and on the other side (Al-Karkh) of Baghdad. This hugely positive development

Haider Hamzoz Media Director at the Station says: “With the erosion of ISIS, the youth are in need of a healthy environment more than ever to feed their self-development and we are building a foundation that will allow them to become world-thinkers, innovators and successful role-models for the new generation to come.”