By Editor on 8th January 2019 in Ahmed Tabaqchali, Investment

December 2018 was probably the worst month in a decade for global equities, however the month’s sharp declines are eerily similar to those that drove the markets lower in December 2015 with the similarity extending to almost a replay of the start of 2019 to that of 2016.

The reasons, now and then, are fears of a slowing world economy with the world’s engine, China, showing signs of a meaningful slowdown. But the drivers of the slowdown this time are increasing evidence of the damage from the US-China trade war, echoing the Iraqi saying that “while reasons are many, death is the same”. However, now and then, the slowdowns were months in the making, but the markets ignored them until late in 2018.

The Iraq Stock Exchange (ISX), as measured by the Rabee Securities RSISUSD Index, on the other had quietly eked out a modest gain throughout the month to end up +1.9%. A gain which came despite sharp declines in the price of oil for the month that took Brent crude prices down about –40% from the October multi-year peak.

The ISX’s negative –15.0% return for 2018 marked the fifth year-over-year decline, on the back of declines of –11.8% in 2017, –17.3% in 2016, –22.7% in 2015, and –25.4% in 2014. The ISX further spent most of the last two years trying to break out; only to revisit the major May 2016 lows as each year came to a close. This contrasts sharply with most global equities as the December sharp sell-offs took them down to about –20% off recent multi-year highs. This makes the risk-reward profile more attractive for the ISX vs. these markets as portfolio allocations are rebalanced in the light of the changed global environment.

Supporting the risk-reward profile for the ISX is the prospect of a recovery in corporate earnings. Iraqi equities should emerge from a multi-year severe economic contraction with the Telecoms being the first to emerge. Two of the major mobile operators out of three national operators reported Q3/2018 earnings that displayed the markers of recovery in earnings, margins and profits. Of the two, AsiaCell (TASC), listed since 2013, has a reported earnings span of 2012-2018 reflecting the operating environment before, during and after the ISIS conflict.

For TASC, the recovery started in late 2017 with the liberation of Mosul and the gradual return of customers lost since the 2014 ISIS invasion of a third of the country. As reported last month, TASC signalled its confidence in its future outlook with a distribution of a 12% dividend on the back of last year’s dividend yield of 14% –which in absolute terms is about a third higher than last year’s dividend. (See “Telecoms dial up Recovery” for further details on TASC).

TASC and IBSD’s performances stand in stark contrast to those of the banks which, as a group, had a dismal performance with the leading bank, the Bank of Baghdad (BBOB) down –52% in 2018 on the back of declines of –33% and –22% for the last two years. Other banks fared just as poorly with declines for a selected group ranging from –63% to –4% for the year. These negative returns don’t include income from dividends –which were quite high for some banks such as Mansour Bank (BMNS) or Commercial Bank Of Iraq (BCOI) that ended the year with dividend yields of 8% and 10% respectively. (See “Of Banks and Budget Surpluses” for more details on the banks).

Looking to 2019, the recovery of the banking sector would hinge on an economic recovery and a return of liquidity to economic activity, which for most of 2018 were held back by political uncertainties surrounding the May parliamentary elections.

Political uncertainty before the May 2018 elections was followed by indecisive election results, which in turn resulted in further uncertainties as the different political parties entered lengthy negotiations for the formation of a coalition government. Adding to these uncertainties was the eruption of massive demonstrations in the south demanding reform and investment into basic services. Things became clearer in early October with the promising appointments of a president and a prime minister in a fashion that broke the failed mould of the past. These were followed with the formation of a working government, which while still incomplete, can begin to act on the needed spending for a post-conflict recovery.

Paradoxically, while the political uncertainties paralyzed the government process, the government’s revenues soared with the recovery in oil prices, which has put the government on course for a two-year accumulated surplus of up to USD 24.5bn by the end of 2018. The oil markets decline from the un-sustainably high levels of the summer however are an un-welcome development but should not alter the country’s improving financial position as long as the government continues with the fiscal discipline brought on by the IMF’s 2016 Stand-By Arrangement (SBA). Moreover, Brent crude prices in a range of USD 50-60/bbl, would ensure that the government maintains this fiscal discipline and focus on reinvestments, a focus and discipline that are normally forgotten during periods of high oil revenues.

The healing effects of higher oil revenues over the last two years should begin the filter down into the broader economy over the next few months. The first evidence of this comes with the recent recovery in broad money, or M2 which acts as a proxy for economic activity, as can be seen in the chart below: - 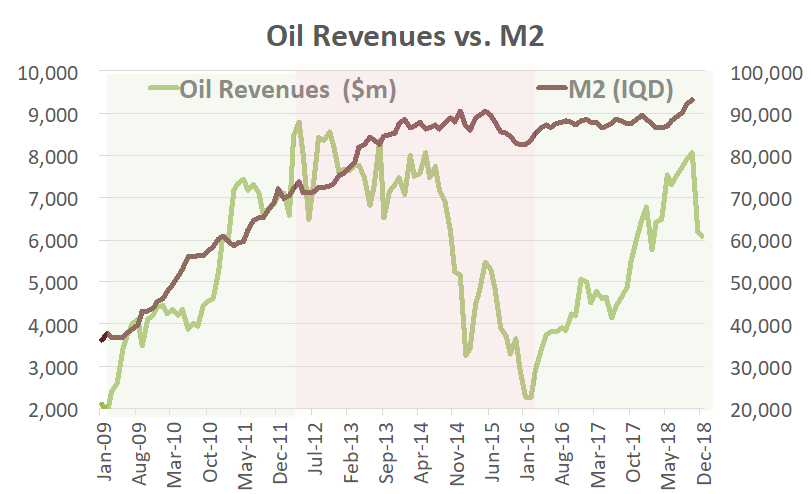 While the October M2 figure is an estimate, it is based on actual M0 figures for the month and the recent M2/M0 multiplier figures. As can be seen M2 was moving sideways since oil revenues recovered in January 2016, but it began to accelerate in June 2018-Septemebr 2018 –and estimates for October suggest a continuation of this trend.

As such, this could mean that liquidity has finally begun to filter down into the economy – which should accelerate as the new government begins to act on its investment programme. Ultimately, this should filter down into the stock market, which should bring to an end the market’s divergence from its past close relationship with oil revenues – which currently is at the widest it has been for the last few years (see chart below). 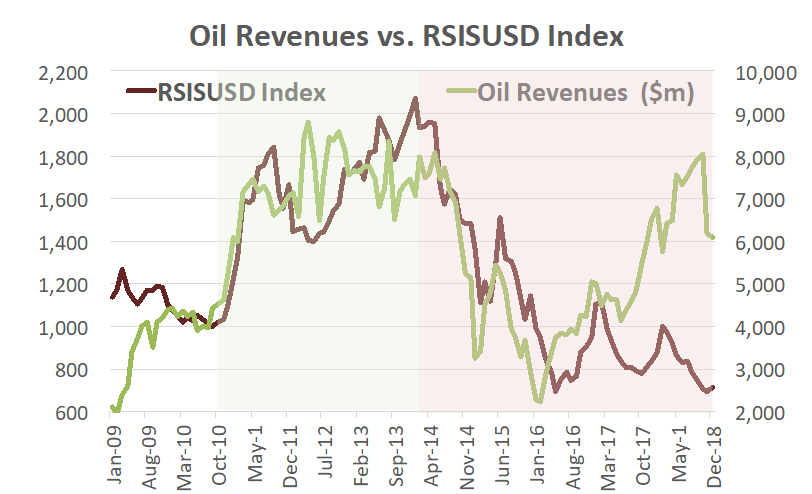 (Note: Oil revenues as of Dec.)

Recovery, in frontier markets, is a mirror image of Mark’s Twain’s phrase on going broke, in that recovery happens gradually and then suddenly. If similar experiences in other frontier markets (declining markets while fundamentals show gradual recovery following a long basing period) then the trend of the last few months could be followed by a sharp reversal.

However, for Iraq significant challenges remain with the huge demands for reconstruction, winning the peace, defeating a likely emerging ISIS insurgency, and controlling violence. In particular, the fragmented politics of the new parliament will continue to be a marker of risk for the government’s future stability, which would in turn pose a risk to economic recovery.