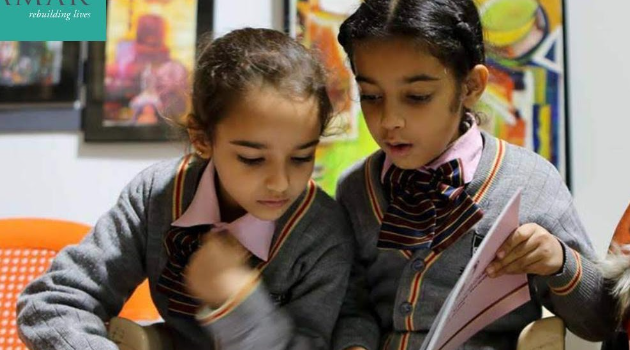 By Editor on 28th March 2019 in Healthcare, Iraq Education and Training News

By Hussein Al-alak. Republished with permission.

Read All About It! The humble book is helping rebuild lives in Iraq

To mark World Book Day, the UK-based charity, the AMAR International Charitable Foundation published these photographs from their school in Basra, Iraq. Each uplifting image demonstrates how AMAR is making positive changes to the lives of Iraqi children, through the power of the written word.

The School for Orphans was built in 2016 and up to 30% of the children who attend have lost both parents to war or disease. The school has modern facilities and provides a broad curriculum, so children get the best start in life. One of their main focuses is on reading.

The AMAR Foundation builds and rehabilitates educational facilities across Iraq, ensuring access to safe, clean classrooms and provides additional infrastructure, so the overall experience for children is conducive to successful learning.

According to the National Literary Trust and Manchester City Council, "Every community faces different challenges and we need local solutions." For example, "reading for 10 minutes every day can help you relax, learn and feel good."

By reading, we improve our literacy levels, increase educational achievements and future employment skills, along with improving our own health and social skills. As Jacqueline Kennedy Onassis once stated: “There are many little ways to enlarge your child’s world. A love of books is the best of all.”

From Manchester to Iraq - building a global village in education

AMAR is rebuilding the lives of some of the poorest and most disadvantaged people in Iraq. With Manchester being home to almost 20,000 Iraqi ex-patriates – many of whom escaped from the tyranny of Saddam Hussein – it’s the natural choice to be one of the charity’s first UK appeals centres.

The most recent Iraqi refugees are following in the footsteps of literary giants, such as poet Siegfried Sassoon, whose family arrived in Manchester from Basra in 1858. The British-Lebanese historian Albert Hourani, who was born in Manchester in 1915. His book, A History of the Arab Peoples, was described by Harvard University Press as being "an instant classic upon publication".

Throughout the 1980's and 1990's, Iraq's refugee children were keen visitors to school libraries across the city. Their parents saw it as a means of improving the youngsters’ spoken and written English, thus helping them to integrate into British daily life.

In 2018, Iraqi students at the University of Manchester collected around 1.000 books as part of the international efforts to re-stock the University of Mosul, which was destroyed whilst the city was under the occupation of Islamic State. 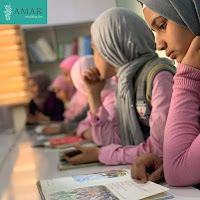 AMAR was founded in 1991 and is chaired by Baroness (Emma) Nicholson of Winterbourne. From 1923-1940, David Lindsay - the 27th Earl of Crawford and the grandfather of Baroness Nicholson - was also chancellor of the University of Manchester.

On the 19th May, AMAR supporters are taking part in the Manchester 10K, where they will be supporting the charity’s efforts in education across Iraq. Since its foundation, more than 5 million Iraqi children and adults have benefited from its services in education.

If you wish to learn more about AMAR’s work, please check out www.amarfoundation.org or you can support AMAR's work in Iraq, by making a solidarity donation online.

Hussein Al-alak is the editor of Iraq Solidarity News (Al-Thawra) and on the 19th May, will be taking part on the Manchester 10K, to support the AMAR Foundation's work in education across Iraq.