By Editor on 5th April 2019 in Ahmed Tabaqchali, Investment

The market, as measured by the Rabee Securities RSISUSD Index, declined by -1.7% in March, bringing the YTD decline to -13.9. Turnover, while up +23% from February’s dismal levels, was still mostly in-line with the historic lows of the last few months. Foreign selling, the cause of the last few weeks’ declines, continued along the recent low levels dragging prices lower given the overall low market liquidity.

It was argued here in November, following the earnings recovery of mobile operator AsiaCell, that “The next few quarters should see a similar recovery for the battered banking sector, with probably the first indicator to recover being the quality of loans. A return of liquidity and an economic pick-up should be followed by a recovery in the quality of bad loans and the reversal of NPL’s (non-preforming loans) with past provisions becoming earnings, thus providing the first boost to earnings recovery. This should be followed by growth in loans and deposits …”.

Mansour Bank’s (BMNS) 2018 results provide a textbook example of the above argument in action. BMNS reported revenue and income growth of +28.1% and +42.6% respectively for 2018 over 2017. Both revenues and net income were helped by a reversal of some of the past provisions for NPL’s (non-preforming loans) as some clients, helped by the economic pick-up, began to pay back loans that were classified as non-performing. However, even without this reversal of provisions, both revenues and earnings would have been up +13.1% and +15.5% respectively on the back of strong underlying metrics.

The first of these underlying metrics was deposit growth of +25.8% in 2018 over 2017, driven by the growth in private sector deposits. This lends support to the argument, made here in January,  that the growth in the monetary base M0 is an early indicator of a recovery in private sector deposit growth.  The second and most promising metric is an acceleration of loan growth to +6.1% in 2018 over 2017, after an almost flat trend. BMNS’s management singled its confidence in its future outlook by declaring a 9.7% dividend yield- up 40% in absolute terms over last year’s dividend payment.

BMNS’s financial performance during the years of conflict up to 2017 was reviewed here in October after it was caught in the selloff that engulfed the banks during the second half of 2018. The improvement in 2018 suggest the end of the tough times for the bank, and potentially for other strong banks in general.

BMNS’ financial performance during the years of conflict, the stability of 2017 and the start of the recovery in 2018 can be seen through the two charts below that look at loans/non-performing loans (NPL’s), and deposits and their association with government budget surpluses/deficits given the central role that government spending plays in the economy. BMNS’ loan and NPL data were supplied by the research team at Rabee Securities which is gratefully acknowledged, while other data were taken from the Ministry of Finance, the Central Bank of Iraq, the Iraq Stock Exchange and company reports. Data from 2010-2014 are based on Iraqi accounting standards, while data from 2015-2018 are based on IFRS, and all calculations use the official USD/IQD exchange rate.

BMNS’ loan book growth peaked in 2015 at the same time that NPL’s peaked. Unlike many other banks in the sector, its loan book was almost flat during 2015-2017, and started to pick up in 2018. NPL’s as a percentage of loans declined by over 60% from the peak (chart below). 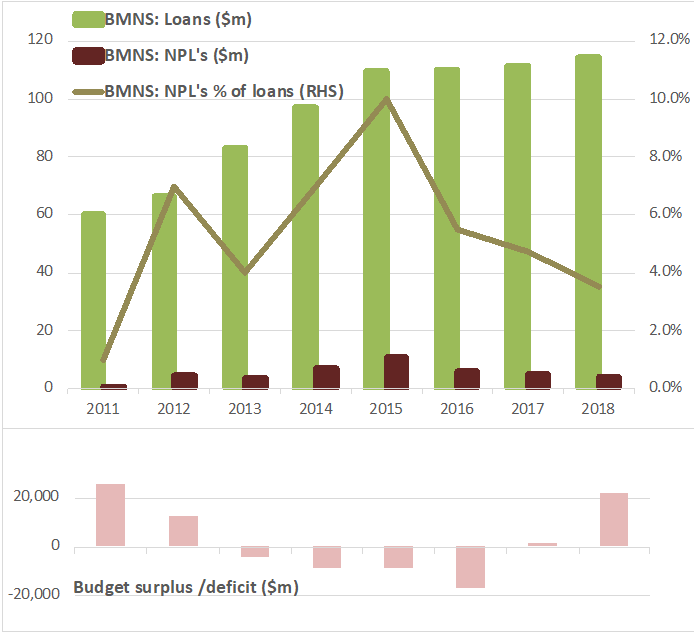 Unlike, almost all other banks in the sector, BMNS experienced deposit growth throughout the crisis, which accelerated during the relative stability in 2017, and continued into 2018. A flat loan book and sharply increasing deposits resulted in a very low loan/deposit ratio allowing BMNS the opportunity to grow its loan book. Moreover, most of these loans are collateralized by property, as most of banks’ loans are in Iraq, and where the norm is for collateral value at 2x the loan. It should be noted, that most of these deposits are in the form of current accounts, followed by on-demand deposits underscoring the nascent nature of the Iraqi banking system and the opportunity for future growth as the society adopts banking culture. 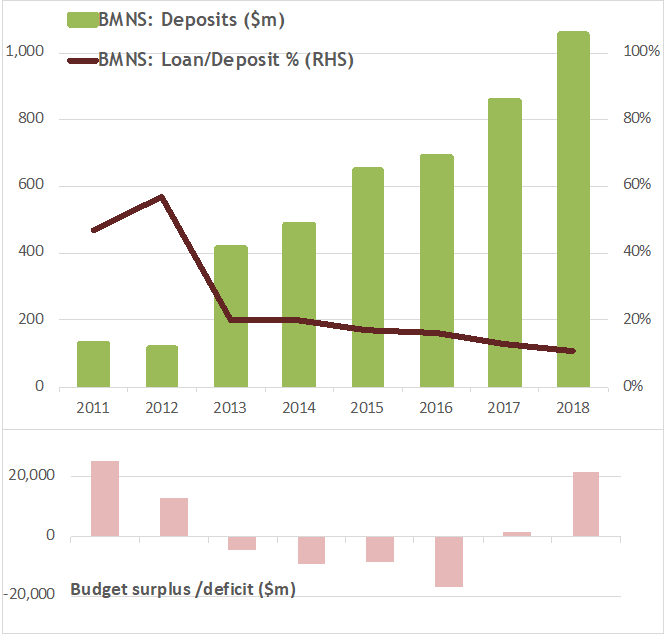 While not all of the other banks enjoy the same financial strength of BMNS, yet the macro forces that contributed to BMNS’s recovery are the same for the sector as a whole and should therefore create the conditions for a recovery in the sector. These macro forces are boosted by the December data from the Ministry of Finance which show that the government recorded a budget surplus of about USD 22.9 bln for 2018, or a two-year surplus of USD 24.4 bln by end of 2018.

The government’s 2019 non-oil investment programme is about USD 12.5 bln, which would be equivalent to about a 7.5% stimulus to the estimated non-oil GDP for 2019. While it is highly unlikely that this would be immediately spent, yet the spending should start with a trickle but grow as investment spending gets underway- and should therefore provide a further boost to the expected banking sector recovery.

The market has made a mockery of expectations, made here over the last few months, that its divergence from its past close relationship with oil revenues (a proxy for the forces driving the economy) should come to an end. Nevertheless, the strong fundamentals of the market’s leading stocks such as Pepsi bottler Baghdad Soft Drinks (IBSD), mobile operator AsiaCell (TASC), and Mansour Bank (BMNS) coupled with resuming growth in oil revenues only add to the unsustainability of this divergence (see chart below). 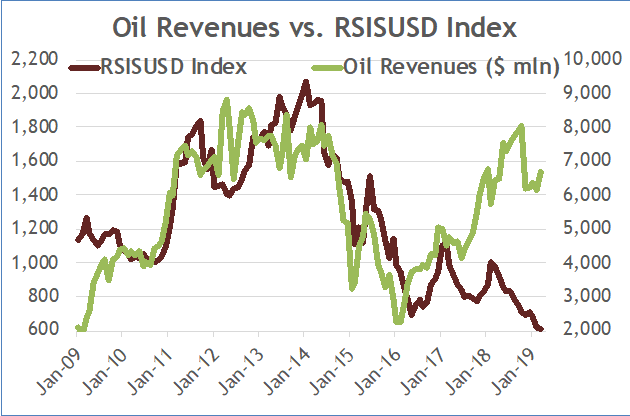 (Note: Oil revenues as of Mar)

One Response to Market Review: “Banks, and the Green Shoots of Recovery”