By Editor on 11th August 2019 in Ahmed Tabaqchali, Investment

The market’s action in July was so quiet that it turned activities like watching paint dry into spectator sports, as the start of the peak summer and holiday season depressed trading volumes.

Nonetheless, the average daily turnover’s decline of −15% month-on-month did not erase the turnover gains made in the prior two months, small as they were.

The highlight of the month, though, was the release of the latest IMF country report for Iraq, in which the IMF updated its estimates, last made in the summer of 2017, for both the future economic outlook and for the last few years. The changes to its GDP growth estimates for the crisis years 2014-2017 were as follows:

While estimates for the years following the conflict changed as follows:

The main takeaway is that the crisis years were, on the whole, weaker than initially expected. While, 2018, the first year following the conflict, was the second year of a deep recession with a contraction of -0.6% on the back of the prior year’s -2.5% decline, instead of being a first year of an economic recovery, at +2.9%, following a shallower decline of -0.4% -a message telegraphed by companies listed on the Iraq Stock Exchange (ISX) over the last two years. On the other hand, the expected recovery in 2019/2020 would be much stronger than estimated earlier with GDP growing at +4.6%/+5.3% instead of +1.7%/+2.0%.

Higher oil exports and the improved oil pricing environment, over the last two years, resulted in much higher government revenues, than estimated earlier, from 2017 onwards. This, with a long lag, is initially translating into increased consumer spending in 2019, given that the government employs over 50% of the working population. This, would then, be followed by the government’s investment spending powering the non-oil economy. Subsequently, the IMF’s new assumptions on non-oil GDP growth rates are crucial for the economy and the stock market. The IMF’s estimates for the severe contraction in non-oil GDP during the crisis years changed as follows:

Accordingly, the downward trajectory in 2015 was much steeper at −14.4% than earlier estimates of −9.6%, while the stability expected for 2017 was, instead, a double dip recession following the bounce in 2016. Also, the contraction lasted longer at four years than earlier expectations of three years. While estimates for the years following the conflict changed as follows:

Confirming the earlier message that 2018 was the second year in a contraction with the non-oil GDP dragging the overall GDP down, negating the strong contributions of higher oil prices and exports to the overall GDP growth. Subsequently, the expected recovery for 2019/2020 would be much stronger at +5.4%/+5.0% versus earlier estimates of +3.0%/+3.9%. The changes, for outlook for non-oil GDP growth, are consistent with the analysis, made here over the last few months, on the drag on the economy in 2018 and early 2019 as a result of the political paralysis before, during, and after the May 2018 parliamentary elections. A paralysis that would have ended in March as the 2019 budget was only passed into law in late February 2019. 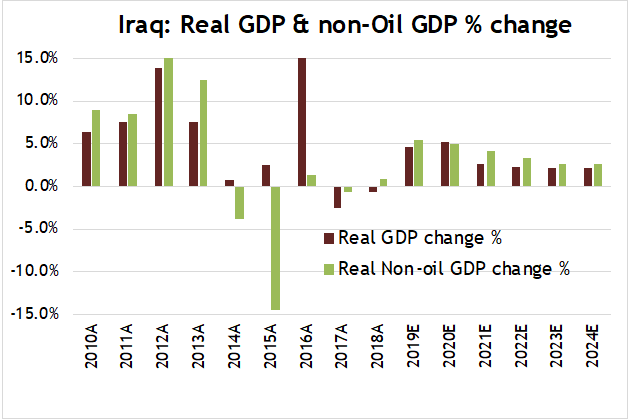 On the heels of the new IMF report, the Ministry of Finance (MoF) data as of May, show a month-on-month growth in investment spending of +20%, but from a very small base, as the January-May investment spending is only about 8% of the non-oil investment spending budget of USD 11.25bln. Implying that most of the estimated +5.4% growth in non-oil GDP for 2019 would be backend loaded, and thus a much stronger growth is anticipated in the second half of 2019 than the first half. It will likely accelerate further in 2020, as the unfinished spending for 2019 spills over into 2020. The government has considerable firepower at its disposal to continue investment spending, even as it continues to under-execute, as the same MoF data for May shows a further growth in budget surplus for 2019 at USD 3.3bln, for a cumulative 29-month surplus of USD 26.5bln.

As postulated here in the past, this investment spending which started with a trickle in 2019, should grow as the full spending gets underway, carrying over into 2020, and ultimately would lead to a sustained economic recovery in line with the new IMF’s future outlook, or probably somewhat higher given the multiplier effects of such spending.

The news from the corporate world supports the economic picture painted by the IMF as evidenced from a number of corporate earnings reports for the second quarter. Pepsi bottler, Baghdad Soft Drinks (IBSD), continued its strong growth with revenues for the six months in 2019 up +3% over the same period in 2018, with its pre-tax profits for the same period up +9%. Telecom operators AsiaCell Communications (TASC) and Zain Iraq (TZNI) reported increased customers by 6% and 4% respectively for the six months in 2019 versus the same period in 2018. However, both revenues and earnings continued, for the same period, to show an industry in the early stages of recovery with TASC having flat revenues but earnings before interest depreciation and amortization (EBITDA) down −9%, while TZNI reported revenues declining −6% and EBITDA up +13%. Both companies cited increased competition and marketing costs.

Bank of Baghdad’s (BBOB) second quarter (Q2) numbers, marked a bank following through with the recovery that began in 2018, which, while confirming the initial signs of a gradual recovery in the sector, also disappointed local speculators who were hoping for a repeat performance of the first quarter (Q1). Deposits continued to grow at +4.3% for the first half of 2019 versus the same period in 2018, while credit growth continued to be negative at −1.4%- which is a slower rate compared with the past- and led to a drop of −27.1% in interest income. FX income recovered +57.0%, which is an easy comparison given the severe drop seen in the same period in 2018, but nevertheless pointing to a stabilization in this income source. Commission income, continuing to rise in importance, was up +21.3%. Net income, while up +983% in the period or at over 10x the figure for the same period in 2018, while very healthy, was mostly achieved in Q1. Therefore, while Q2’s net income showed continued growth, it nevertheless poured cold water over speculative hopes for the bank to resume dividend payments for 2018’s earnings. It was these hopes that led to a +62.5% rally in the stock in May, which soon moderated to a decline of −12.8% in June, and declined a further −17.6% in July as the bank confirmed in its AGM that it would not pay dividends for the year. The stock’s closing price in July, is still up +16.6% from the April close before it started its wild three-month ride. While, BBOB pulled the other leading banks up with it in May, it did not drag them lower in June and July which is very different from the market’s responses to such disappointments in 2018. That time all banks were painted by the same brush, which shows a market that has begun to discriminate showing it has likely bottomed or is making a bottom.

Trading activity in August will likely continue to be in-line with that of July’s activity, as it is part of the peak of the summer season and will include the second Eid holiday break of the year. While, there is no new source of liquidity in the market, and local speculators continue to dominate activity, foreign investors have been consistent net buyers over the last few of months in a marked contrast from the picture for most of the prior months as the chart below shows. 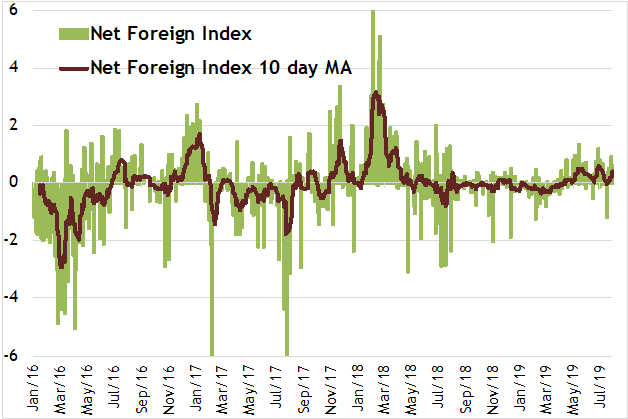 The extension of the June pull-back in July, continues to suggests the beginning of a consolidation phase, which would need a significant recovery in turnover before a recovery can become sustainable and for the market, as measured by the Rabee Securities RSISX USD Index (RSISUSD), to claw back some of the −70.5% decline from the peak in early 2014 to July’s 2019 closing levels.