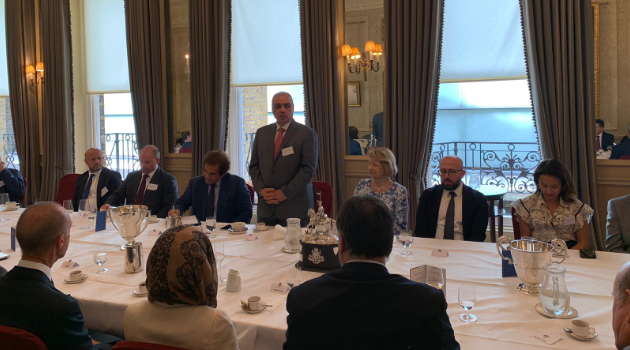 The Minister, accompanied by a delegation of officials, was on a 4 day official visit to the United Kingdom organised by the Department of International Trade.

His visit included meetings with IBBC Members Rolls-Royce and Serco, and a number of bilateral meetings with the British Government. UK companies play a leading role in aviation in Iraq and the Ministers visit cemented the existing ties while exploring new ventures.

By courtesy of Brigadier James Ellery and thanks to the generous sponsorship of Vitol, IBBC was fortunate to offer the Minister and his delegation Lunch together with about 20 IBBC Members and guests at the Cavalry and Guards Club on Piccadilly.

Delegates at the Lunch were addressed by Baroness Nicholson, IBBC President and the Prime Ministers Trade Envoy for Iraq, and of course the Minister who expressed his great satisfaction about his visit and working so closely with the UK Government, UK businesses and the IBBC.

He also made it clear that establishing regular direct return flights between London and Baghdad was one of his top priorities and that he was looking at upgrading some of the major Iraqi transport infrastructure during his tenure.

“Minister Luaibi has been a staunch supporter of IBBC members in Iraq over some years now, first as Deputy Minister and now as Minister. His office door in Baghdad is always open to us and I am pleased to say that UK companies lead the way in airport security, ground handling and air traffic control.

"Now we are looking forward for Rolls-Royce to work with Iraqi Airways and for one of the great UK architects and design companies to work on an new airport project in country.”