By Editor on 10th October 2019 in Ahmed Tabaqchali, Investment

Market Review: “The Economy, the Protest Movement and the Government”

In early October Iraq, Baghdad in particular, erupted in massive demonstrations, that at the time of writing led to over 110 civilian deaths and over 6,000 casualties. Demonstrations demanding the provision of services, economic prosperity and an end to corruption have been a feature of the Iraqi scene since 2010. However, they have grown in tempo, peaked in last year’s Basra’s demonstrations, and reignited again in October as a young and angry population ran out of patience with the government’s sclerotic pace of reform.

The government’s heavy-handed and over the top response to the protests, very much like last year in Basra, has angered the youth and transformed the protests into riots. While a worrying development that risks an escalation of violence and potentially a much larger conflict, these protests will likely run out of steam due to a combination of carrot, stick and fatigue, just like last year’s then deadly protests. (*)

The carrot element began to take shape with the government’s initial package of handouts in the form of payments, training programmes and subsidised loans for the unemployed youth, as well as subsidized housing for the country’s poor. The scope of these would be enlarged significantly over the course of the next few weeks as the government tries to appease an increasingly sceptical youth movement.

The government has ample resources to implement all of these, as it has achieved a 31-month budget surplus of USD 27.5 bln by the end of July 2019 as shown by the Ministry of Finance’s latest data. Though, the impetus for it to act is driven by effects of the multi-year protest movement that had a profound effect on how the 2018 election was fought and the current government formation, as it led to the beginning of the break-up of the ethno-sectarian monolithic blocs that were dominant over the past 16 years and which were at the root of Iraq’s past instability.

An expansionary 2020 budget on the heels of 2019’s expansionary budget would likely fuel consumer spending and potentially lead to a stronger than expected consumer-led 3-4 year economic recovery.  Which could become a sustainable multi-year economic expansion should the government begin to implement a much-needed reconstruction and investment spending program in the non-oil economy.

The early signs of a consumer led economic recovery can be seen from the latest economic data for 2018 as reported by the Central Bank of Iraq (CBI) in its recently released “Annual Statistical Bulletin for 2018”. The Bulletin showed that Iraq’s imports were up +18% in 2018, on the back of the recovery of +13% that began in 2017, following the severe declines from 2014-2016 which were caused by the twin shocks of the ISIS war and the collapse in oil prices crushing the economy, and with-it Iraq’s domestic demand for goods.

The revival in imports in 2017 and 2018 is likely to be a function of a recovery of government spending and a tentative recovery in consumer spending with the resultant increase in demand for imports- as the country is heavily reliant on imports to satisfy domestic demand. Importantly, the growth in imports of machinery and transport equipment argue well for the health of the underlying economic activity as can be seen from the chart below. 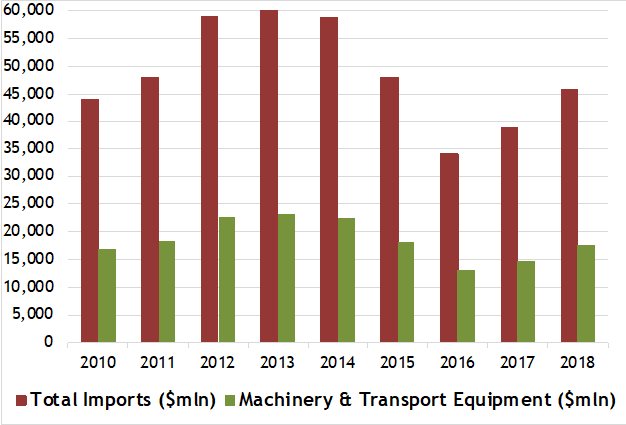 Confirming this recovery, is the data on “New Vehicle Sales” as reported by the International Organization of Motor Vehicle Manufacturers, which were up +60% in 2018 on the back of +35% increase in 2017. The recovery, while from a very low base, is nevertheless encouraging. 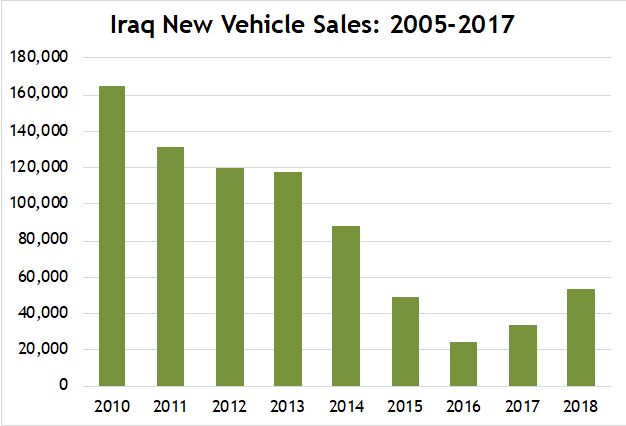 The market’s action during the demonstrations has been mostly subdued as the curfews and the government’s shutting of the internet had a negative effect on activity and prices drifted lower with the market, as measured by the Rabee Securities RSISX USD Index (RSISUSD), declining by about −0.7% month-month as of the time of writing.

However, September ended on a promising note, as the market was up +0.8% for the month and down −4.1% for the year. Average daily turnover declined −7% month-month and displaced last month as the third lowest level over the last five years. Foreign investors continued to be net buyers, consistent with the trend of the last few months, although at lower total levels, in-line with the decline in total turnover as can be seen in the chart below.

Index of net foreign activity on the Iraq Stock Exchange 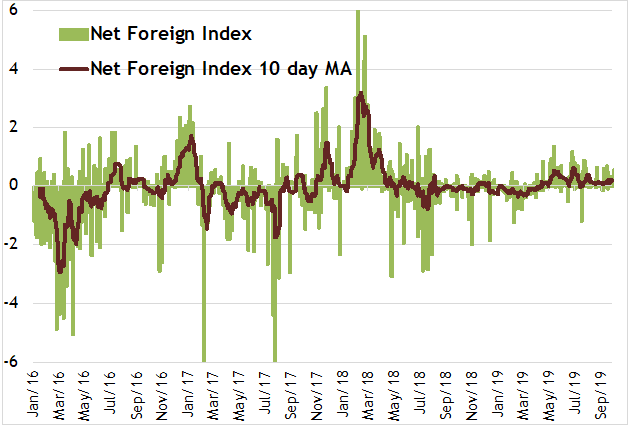 During September, the market’s dynamics followed through with the improvement discussed last month as the banking sector continues to be led by the National Bank of Iraq (BNOI) which was up +39.1%, with other leading banks trailing behind, such as the Bank of Baghdad (BBOB) up +3.4%, Commercial Bank of Iraq (BCOI) up +2.1%, while Mansour Bank (BMNS) was down −1.5%. However, it should be noted that the rallies in the banks were all on low turnover in-line with the market’s overall exceptionally low turnover. The return of liquidity will determine the true direction of the group- whether sellers will overwhelm buyers sending prices lower, or if buyers will overwhelm sellers sending prices higher. The discriminating nature of the market, discussed here over the last two months, argues for the later.