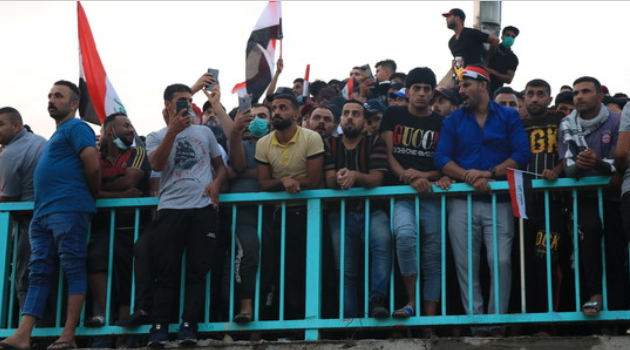 By Editor on 3rd November 2019 in Politics, Security

Diwaniyah Protests Reveal Divide, When It Comes To Anti-Govt. Tactics

While some demonstrators in Diwaniyah cleaned up the street, provided free meals and supported peaceful protesters, others burned politician’s offices and homes.

This weekend, in the southern city of Diwaniyah, thousands of people gathered near the offices of the provincial government. All Friday morning, more demonstrators joined the crowd and there were calls to maintain the peace while demanding political reform.

The government offices themselves were blockaded with concrete barriers and security forces surrounded the headquarters. Many of the demonstrators wanted to try and enter the building but security forces repelled them. Eventually, emboldened by their numbers, some of the protestors started trying to enter the offices by climbing walls at the back of the complex. It was at this stage that security forces began to fire tear gas at the crowd.

In a large square opposite the government offices, protestors carrying a large sign climbed a central monument. Locals were surprised when the sign was eventually unfurled: It was the picture of a young man who had been killed during the protests. On the sign were written demands for justice, asking the government to reveal the names of those who had killed this young demonstrator.

The Iraqi federal government had said their investigations into the killing of unarmed protestors by snipers were concluded; as a result, around a dozen military officers were suspended. However the question asked on this banner - who were the snipers? - was never satisfactorily answered.

Many among Diwaniyah’s demonstrators were determined to stay in the city centre all weekend and a number of volunteer initiatives began as a result.

Restaurants and shops nearby were closed so teams of locals, many of them women, arrived and offered the demonstrators food, water and tea for free.

Unlike demonstrations that took place earlier in the month, there were many more Iraqi women present at the weekend’s events.

“We decided to participate more this time, to support our brothers,” Afra al-Taie, a local activist, told NIQASH. “We believe that the presence of females in these protests will ease tensions because both the security forces and the protesters feel a sense of responsibility. They feel that they should protect women who are present.”

During the protests, the streets were increasingly littered but teams of young men began to clean them, picking up rubbish. “We don’t want to tarnish our reputation and we don’t want the government to accuse us of creating chaos,” Naseer al-Mohamdawi, one of those picking up litter, told NIQASH. “So we are cleaning up and organizing things in this area so nobody can criticize us.”

But the demonstrators in Diwaniyah did not all feel the same way. Angry protesters also decided to split into several groups and go to the headquarters of political parties and to the homes of their officials. The headquarters of one of those, the powerful Badr Organization, which boasts one of the largest Shiite Muslim militias in Iraq, was set on fire. It was here that tragedy struck. While one group of protesters was inside the building, that had otherwise been empty, another group of protesters apparently set the building alight. Eleven people trapped inside the building died although some managed to get out by jumping off the roof.

Another of Diwaniyah’s youthful demonstrators, Abdul Rida al-Khafaji, said this tragic incident was the result of a lack of coordination between the different groups. “The young people here are just so angry, some of them don’t listen to the instructions from the coordinating committees of the protests,” he explained.

During the weekend, several other party offices were also attacked and burned by protesters. Also attacked was a political party-controlled radio station and the homes of the head of the provincial council, Jubair Salman al-Jubouri, and MP Faisal al-Nayeli. At the headquarters of the notoriously hardline League of the Righteous militia, or Asaib Ahl al-Haq, there was an exchange of gunfire.

In an attempt to control the situation, local security forces eventually declared a curfew. A large military contingent also arrived to reinforce local troops. While a number of demonstrators were eventually arrested, most of the participants say they will continue to go to the streets and assert their right to protest.