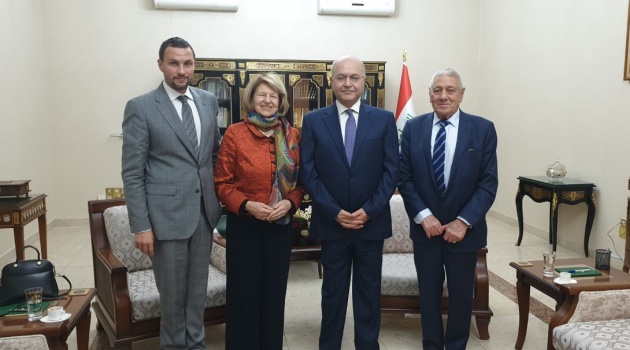 The team updated the President on the work of IBBC and it’s members in Iraq. There followed wide ranging discussions on current affairs in Iraq and internationally. The President was ‘delighted to see IBBC in Baghdad in these challenging times and complimented the organisation for its ongoing and very effective work. He said that he was willing to support IBBC fully whenever required.’

Additional meetings included the Chief of Justice Faik Zidan, to follow up on his recent visit to London when IBBC hosted him, and to discuss the legal framework in Iraq and current affairs.

Further meetings included Civil Society activist Mrs Hana to understand the many reasons for the protests and the latest news from Tahir Square and around the country. IBBC expressed sympathy for the movement and discussed ways in which the protest movement could succeed in some of it’s demands without facing a full confrontation with the security forces.

At the US Ambassador Tueller’s residence, the Ambassador, guests and Ambassadors from Canada and Australia and John Tucknot UK Deputy Head of mission, discussed the work of IBBC and how to strengthen collaboration with the US, Canada and Australia, to support the private sector. IBBC is widely recognised as being the most successful trade council in Iraq.

Thanks also to IIB, Al Burhan Group, G4S, Zain and March Group for their support during the visit.