By Editor on 8th November 2019 in Ahmed Tabaqchali, Investment

Demonstrations resumed during the last week of October, following a two-week lull since they started. While the government has dialled down on its earlier excessive violence in response to these demonstrations, the cumulative causality list increased considerably to over 250 dead and over 10,000 injured.

However, the demonstrations continued to be mostly peaceful and the overall atmosphere has the feel of a carnival, especially in Baghdad’s Tahrir Square. There, Iraqis of all walks of life, social classes, sexes and ages, have taken to the square demanding the provision of services, economic prosperity and an end to corruption, and all the while celebrating their newfound sense of Iraqi nationalism that first emerged with the conclusion of the ISIS conflict. 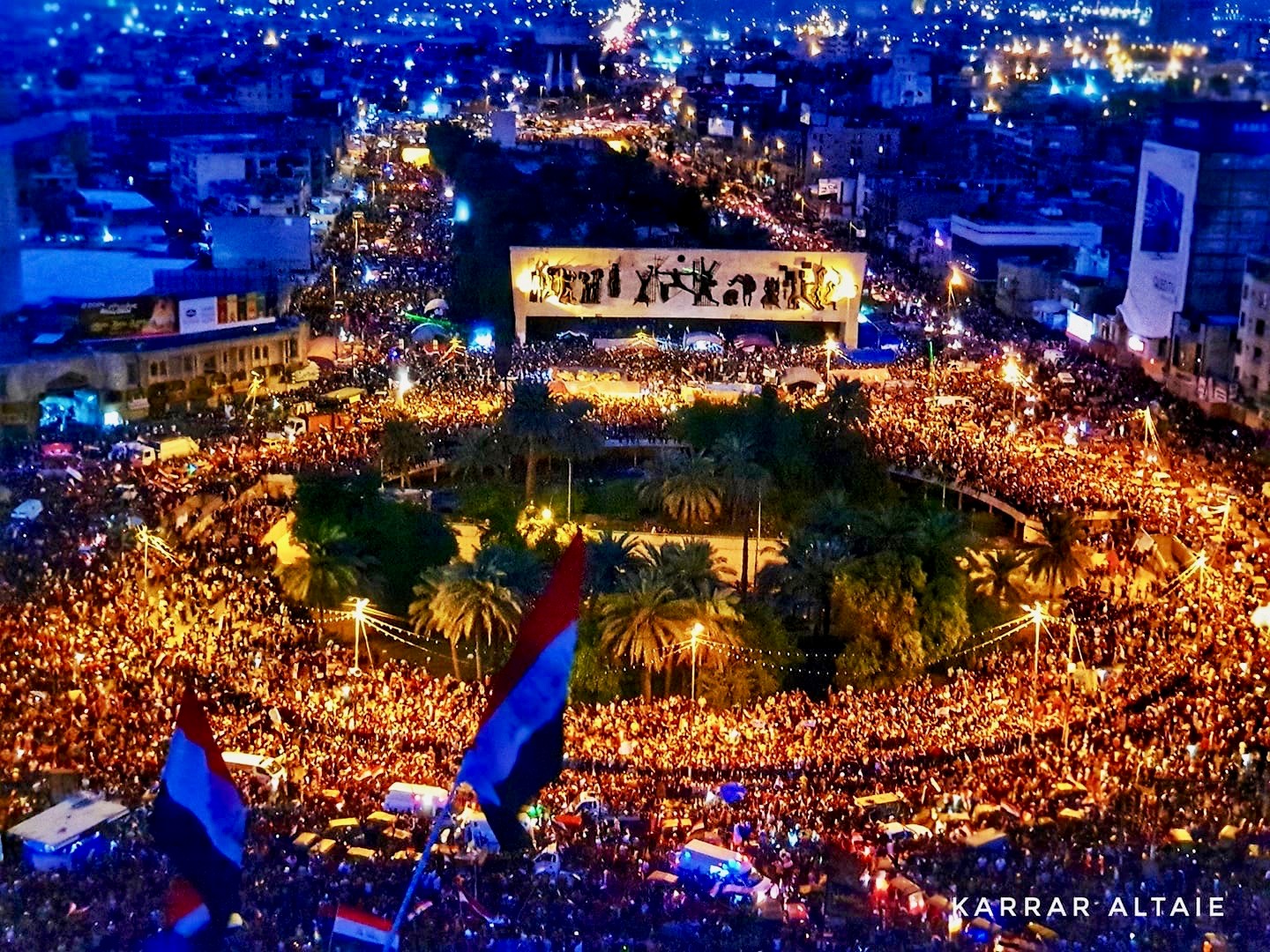 The sheer number of people taking part in the protests is finally beginning to have an effect on the political class, which was hoping to wait out and buy the demonstrations through a series of ever-increasing handouts. A political consensus is emerging for the need to undertake serious reforms, address corruption and hold early elections after amending the electoral rules that largely allowed the same elite to maintain their oversized influence on successive government formations.

These changes, while unlikely to see the light of day in their entirety, will hasten the break-up of the ethno-sectarian monolithic blocs that were dominant over the past 16 years and which were at the root of Iraq’s past instability. In the process they will break the political logjam that was behind the failures of the past to implement the reconstruction of the country.

The most important consequence of the emerging consensus is either the resignation of the government, or a serious effort at amending the election rules leading to early elections. Whichever permutation emerges, it will lead to a caretaker government, followed by a return of government paralysis and fears of a replay of the events that held back the economy in 2018 and the first half of 2019 as discussed here over the last few months.

However, there are crucial differences between now and then. The first is that an upcoming caretaker government, while unable to act on capital spending, will follow up with implementing the current spending plans of the 2019 expansionary budget. Moreover, it would continue to implement this budget in 2020 throughout the upcoming months of pre-election manoeuvring, elections, and post-election government formation. The most important consequence of this is the continuation and sustainability of the consumer led economic recovery that first manifested itself through the sharp increase of Iraq’s imports, as discussed here last month, to satisfy growing consumer demands.

The freeze of capital spending is a negative factor, suspending its intended effect of turning an upcoming three to four year consumer-led economic recovery into a multiyear economic boom. However, mitigating this negative is the fact that a future capital spending freeze is undistinguishable from the current lack of such spending. The Ministry of Finance’s (MoF) latest data as of August reveal a total non-oil capital spending of about USD 1.3 bln from a budgeted USD 11.25 bln for the whole year.

The same data shows a continued build-up of the budget surplus of about USD 7.2 bln for 2019 by end of August, or a cumulative 32-month surplus of USD 30.3 bln. This would provide the wherewithal for an upcoming government to embark on a significant capital spending plan that it can use to solidify its position as the government that would meet the people’s expectations. An un-intended consequence of the current government’s paralysis is the elimination of the temptation to spend its way out of the crises by ever increasing handouts at the expense of capital spending.

The market seems to look to the future through these developments, as it spent most of the month, as measured by the Rabee Securities RSISX USD Index (RSISUSD), fluctuating +/− 1% within the close of the prior month, to end October at +1.9%, and down −2.3% for the year. Encouragingly, the market’s dynamics followed through with the improvement discussed here over the last few months as its breadth continued to broaden beyond the banks, which came to the forefront this year, or that of the high-quality leadership of Pepsi bottler Baghdad Soft Drinks (IBSD) and mobile operator AsiaCell (TASC) that outperformed in 2018. This broadening is seen in many sectors that are leveraged to a consumer recovery and/or to an expansionary government budget.

A group that stands to benefit from an expansionary budget, are the healthcare providers, which depend on government health service expenditures to drive their earnings growth. The government curtailed all such outlays following the twin crises of the ISIS conflict and the collapse in oil prices in 2014, with devasting consequences for the companies that depend on such spending. The market began to focus on the sector in the last few months with expectations that such, hoped for, spending would be manifested in the group’s future earnings - even though the earnings results for most of the companies show no evidence of such earnings recovery as of yet. It’s worth noting that  healthcare expenditures would be part of the provision of goods and services in the current budget section, and not from capital investments, and as such should not be affected by a future government paralysis. This dynamic can be seen in the stock price performance of Al-Mansour Pharmaceuticals Industries (IMAP) and AL- Kindi of Veterinary Vaccines Drugs (IKLV), which were up +43.8% and +28.8% respectively year to date, with most of the performance taking place in the last few months during which the overall market began to stabilize, as can be seen from the chart below: 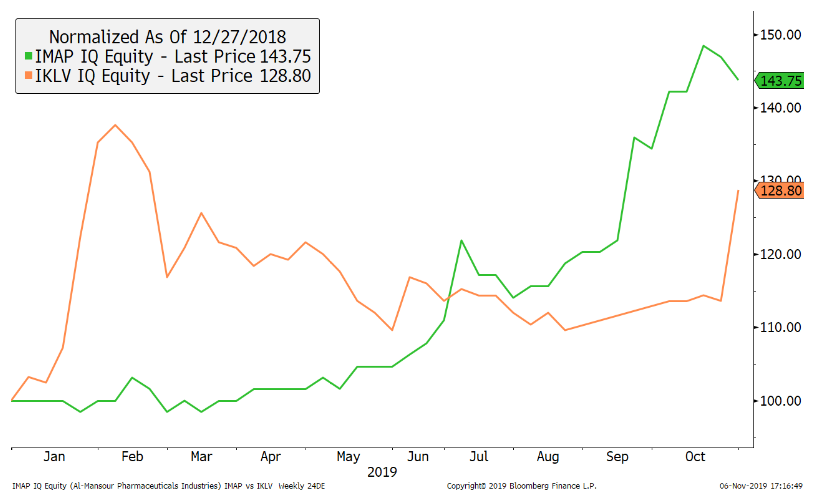 Whilst the market is in the early process of forming a base it is worthwhile to point out its continued divergence from its past close relationship with oil revenues (a proxy for the forces driving the economy). This divergence is still at the widest it has been for the last few years, and it is showing tentative signs of narrowing this divergence (see below). 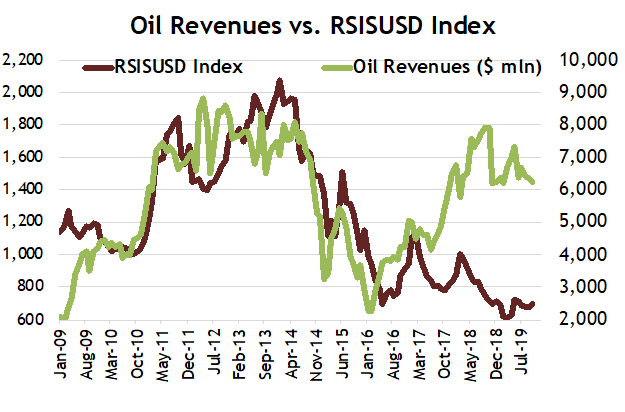 (Note: Oil revenues as of Sep, AFC estimates for Oct)

Coverage of the nature and breadth of the demonstrations in Tahir Square, has been provided by a number of Iraqi photographers on their Facebook pages.

Some of these photographers are:

The following links, a photo album, a video, and an article are provided below: