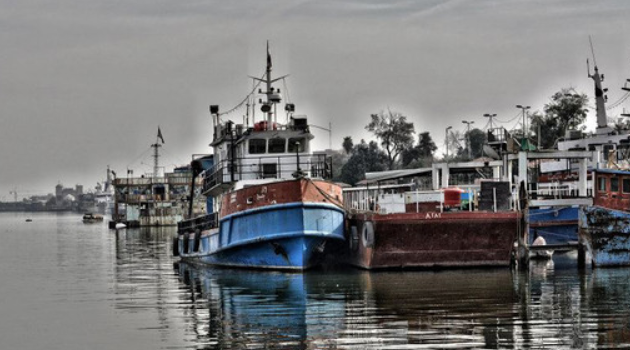 For years, fish and other marine life has been disappearing from the all-important Shatt al-Arab waterway in Basra. This wide river at the southern end of Iraq is an important port, linking Iraq with the Persian gulf. It is a vital part of the local environment.

In the more recent past, there have been criticisms that the Shatt al-Arab is too polluted, radioactive and affected with bacterial diseases. Locals often ask why. But it’s not like there is a lack of knowledge about the various causes of this river’s life-threatening problems. A wide number of experts in the area have been studying the different types of pollution problems carefully for years.

Researcher Jabbar Hafez Jebur has conducted a number of studies on whether the Shatt al-Arab is radioactive, taking samples from  various contributing rivers. “The concentration of radioactive elements are within the permitted limits and do not require any action,” he told NIQASH.

The Shatt al-Arab is free of radioactivity, confirms Khajak Vartanian, a physicist with the southern Directorate of the Environment. “But,” he added, “there is growing chemical pollution.”

“Yes, the river is contaminated with toxic minerals but their levels are still within the limits of daily use for irrigation and for aquatic survival,” al-Asadi explained. In fact, much of the pollution comes from the gas emissions in the atmosphere that result from oil extraction activities, he continued, as well as the pollutants issued by diesel generators. These pollutants, discharged into the air, end up in the river after it rains.

Where the various toxins end up depends very much on the tides in the Shatt al-Arab. Their location depends less on the discharge of industrial and domestic sewage, he notes, pointing out that man-made discharges directly into the river have less of an impact than those coming from the sky.

Basra’s Ministry of the Environment regularly monitors the amount of pollution in the waterways at various different points, says Ahmed Jassim Hanoun, director of the department for the protection of the environment at the ministry. Samples are taken regularly and tested, he adds.

Hanoun says his offices are concerned about the direct discharge of pollutants into the Shatt al-Arab and other nearby rivers. But he believes that one of the most important factors is the level of salinity, or salt, in the water.

No bacterial diseases were discovered in the waterways recently and Hanoun says this has a lot to do with the lower levels of salinity. Authorities have tried to ensure that more fresh water is released into the Shatt al-Arab to keep fresh water flowing, and prevent sea water from coming in from the ocean.

“What we noticed after periodic tests throughout 2019 is that the releases of fresh water from the Tigris river, coming from out of Maysan province, has meant that there is more resistance to the salt tongue coming in from the sea,” Hanoun said. The previous year, when there was not as much rainfall upriver, the Shatt al-Arab was a lot saltier and therefore more prone to bacterial growth.

Besides the bacterial contamination, saline water from the sea and industrial and environmental pollution, there is another thing that isn’t helping, Hanoun points out: The number of submerged objects in the waterway.

His department has regularly asked the port authority to clear the waterways of the hundreds of objects there, he says.

“We are suffering because of the delay from the government,” says Khaled al-Talibi, a sea captain and head of a local mariners’ association. “The submerged items disrupt navigation in the harbour and change the way the sand and silt moves, which in turn causes a change in currents and reduces the flow of water to the river mouth.”

One Response to What’s Really Polluting the Shatt al-Arab?