By Editor on 9th December 2019 in Ahmed Tabaqchali, Investment

Market Review: “Fundamentals on the Upswing, Market continues to Bottom”

The demonstrations which resumed in the last week of October persisted into November and seem likely to continue for some time yet. This contrasts with earlier expectations that they would run out of steam due to a combination of carrot, stick and fatigue, none of which, alone or in combination, dented the spirt of an increasingly sceptical youth movement.

The first to fail were the bundle of carrots in the form of successively enlarged government handouts over the course of the last few weeks. The sticks, in the form of an excessive government crackdown, failed too –  even though the cumulative causality list increased considerably to over 450 people dead and nearly 20,000 wounded, the bulk of which were demonstrators.

The expected fatigue turned out instead to be an explosion of art as the protest movement acquired its own symbolic art form expressed through large street murals, public performances, music and in particular the movement’s version of calligraffiti- a hybrid of calligraphy, typography, and graffiti. The sheer number of casualties among the country’s youth, while not sufficient to shake the political class into action, caused an expression of extreme anger by the leading religious authorities that led to the resignation of the prime minister by month end. Consequently, there is an intense political manoeuvring among the political elite over the choice and form of a new government that would undertake the needed electoral reform, to be followed by early elections in 2020. Complicating matters is the extent of the compromises by the political elite to ensure that these elections would be a meaningful departure from the prior ones that largely allowed them to maintain their oversized influence on successive government formations.

While it is unlikely that the political elite will implement reforms that would threaten their interests, a consensus is emerging for making enough changes that would lead to the formation of future governments with a majority in parliament and parliamentary opposition, as opposed to the case since 2003 in which successive governments were composed of all parties in parliament, with neither a defined government programme nor any real opposition. This was the root cause of the failures of the past to implement the reconstruction of the country, as each party pursued its own program within its own sphere of influence within an all-inclusive government.

These developments have yet to be played out and a lot of uncertainties remain, yet the near-term effect on the economy would be that the current caretaker government, while unable to act on capital spending plans, will follow up with implementing the current spending element of the 2019 expansionary budget. Moreover, it will continue to implement this budget in 2020 through the upcoming months of pre-election manoeuvring, elections, and post-election government formation. The most important consequence of this is the sustainable continuation of the consumer led economic recovery that first manifested itself through the growth of Iraq’s imports, as discussed here in September 2019, to satisfy consumer demands.

The fuel for this consumer spending can be seen through the return of liquidity to the real economy, expressed through the continued growth of broad money, or M2, as a proxy for economic activity due to its sensitivity to oil revenues (chart below). The healing effects of a benign oil pricing environment in which the trailing twelve-month average Brent crude price is about USD 63/bbl, provided the wherewithal for the government to implement its expansionary budget for 2019 and probably into 2020. 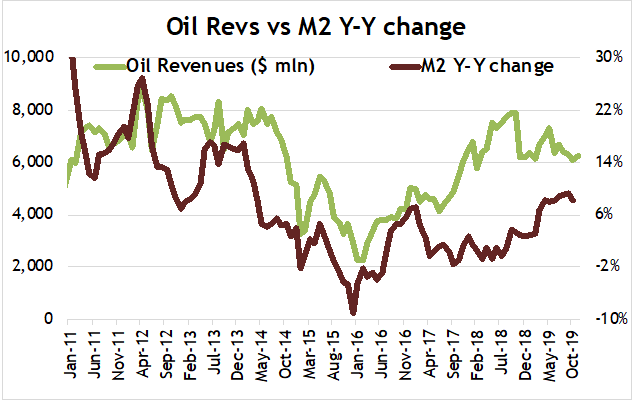 (Note: M2 as of Sep. with AFC estimates for Oct.; Oil revenues as of Nov.)

The growth in M2, as reported here earlier in the year, first accelerated in May 2018 with a pick-up in year-over-year change every month as can be seen from the above chart. However, the current figures for M2 are stronger than discussed here earlier as the Central Bank of Iraq (CBI) upwardly revised the figures for M2 for each month for the last few years – as outlined in the summer release of its “Annual Statistical Bulletin for 2018”. The upshot is that M2’s recovery, while slightly less in year-over-year percentage growth, is taking place from a higher base and thus the amount of liquidity in the economy is larger than believed earlier.

Some of the effects of this liquidity were seen in the return of construction activity in Baghdad as reported here in AFC’s Iraq travel report in the summer. While this would be overshadowed by the demonstrations in Baghdad and the south of the country, this construction activity continues at an accelerated pace in the semi-autonomous Kurdistan Region of Iraq (KRI) which has not seen any demonstrations. While a far cry from the pre-crisis boom, the return of such activity is remarkable and promising for the region’s economy. Moreover, it should have positive implications for banks’ non-performing loans (NPL’s) given the size of construction related loans.

The stock market continues to look through the political developments and is probably beginning to take note of the return of this liquidity to the economy as it spent most of the month, as measured by the Rabee Securities RSISX USD Index (RSISUSD), at between –2.0% and –1.0% of the close of the previous month, to end the month down –1.5%, and down –3.8% for the year.

Encouragingly, the stock market’s dynamics followed through with the improvement discussed here over the last few months, as its breadth continued to broaden with a number of small industrial companies experiencing meaningful year-to-date gains. Like the healthcare providers covered in this report last month, small industrial companies experienced the best gains in the last few months in which the overall market began to stabilize. This dynamic can be seen in the performance of National Chemical & Plastic (INCP), Metallic & Bicycles Industries (IMIB) and Modern Sewing (IMOS), up +95.6%, +34.3% and +62.9% respectively for the year by end of November. 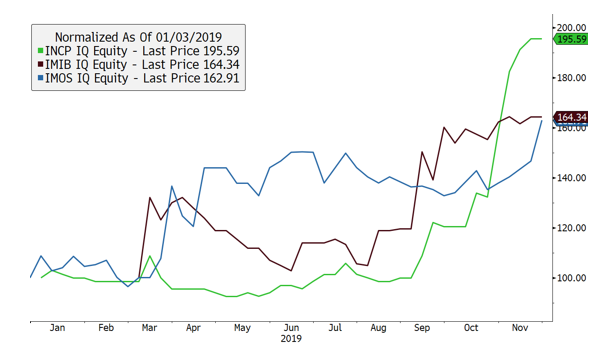 Moreover, like the healthcare providers, the stock market is focusing on a revival in earnings for these companies even though the earning results for them show no evidence of such an earnings recovery. It should be noted that the stock prices of these companies benefit from their illiquidity, in particular IMIB did not trade between early August 2018 and early March 2019, and the +34.3% YTD change used is based on the last traded price of the stock in 2018.

A recovery following this bottom formation could see the market, as measured by the Rabee Securities RSISX USD Index (RSISUSD), claw back some of the −67.0% decline from the peak in early 2014 to November 2019 closing levels.