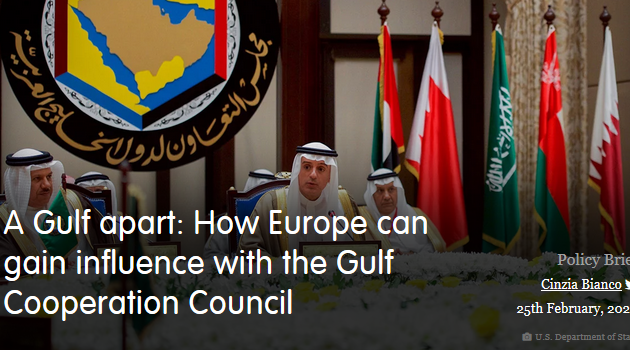 By Editor on 10th March 2020 in Politics, Security

By Cinzia Bianco, for the European Council on Foreign Relations (ECFR). Any opinions expressed here are those of the author and do not necessarily reflect the views of Iraq Business News.

A Gulf apart: How Europe can gain influence with the Gulf Cooperation Council

Gulf Arab states are at the centre of a new balance of power in the Middle East and north Africa (MENA).

With US dominance of the region declining amid the chaos of the past decade, members of the Gulf Cooperation Council (GCC) have expanded their international role like never before.

They pursued rivalries and developed alliances across north Africa and the Levant. They used military power to try to determine the outcome of intractable conflicts in Libya and Yemen.

And they reached across borders to stifle or support grassroots Islamist movements, not least the Muslim Brotherhood and Shia resistance groups.