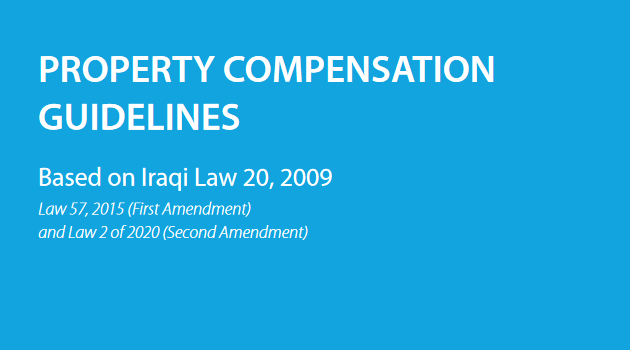 By Editor on 24th April 2020 in Agriculture, Investment, Politics

Iraq has experienced a massive wave of displacement over the last four years that has caused an intricate housing, land and property situation.

Approximately 5.8 million Iraqis were forced to abandon their homes and leave their areas of origin as a consequence of fear of violence, lack of freedom of movement, lack of access to basic services. In conflict affected areas, unlawful seizure, sale, systematic looting, and destruction of properties were highly common, and are consequently unable to return to their area of origin, are not able to re-establish their lives, or do not have the financial resources to rebuild their homes.

Enjoying tenure security and access to housing is a human right and humanitarian and governmental actors have a responsibility in ensuring that the rights of people are restored and respected.

PURPOSE OF THE COMPENSATION GUIDELINES

These guidelines have been drafted by HLP Sub-cluster Iraq to advise humanitarian actors who are working on compensation and HLP related issues.

The guidelines set out the scheme as set out in Iraq's Law 20 of 2009,3 Law 574 of 2015 and Law 2 of 20205 which govern the compensation of all Iraqi citizens affected by damage or destruction of their properties caused by war operations, military errors and terrorist actions in Iraq.

It should be noted that the below guidelines will focus on compensation for housing, land and property only and not any of the other categories eligible for compensation foreseen by above mentioned laws.