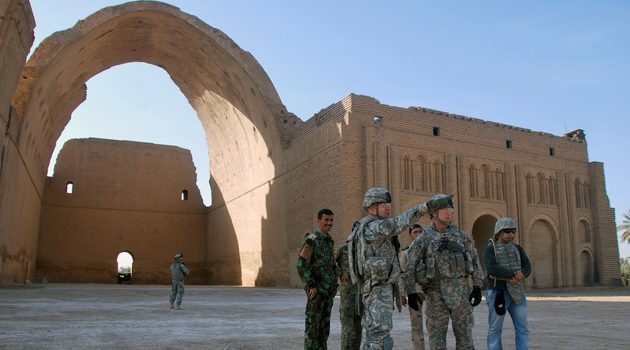 By Editor on 31st January 2021 in Iraq Public Works News

ALIPH and the Iraqi Ministry of Culture join forces to rescue the Arch of Ctesiphon, the world's largest brick vault constructed until modern times

The International alliance for the protection of heritage in conflict areas (ALIPH) and the Iraqi Ministry of Culture, Tourism and Antiquities have announced urgent stabilization measures to protect the endangered Arch of Ctesiphon (Taq Kasra, Iraq), located 40 km south of Baghdad.

Taq Kasra, built in the 6th century CE, is the world's largest brick vault and the largest free-standing arch constructed until modern times. A part of a Sasanian palace complex, it stands at 37 meters high and 26 meters wide, making it a unique monument of great historical and cultural significance.Because of its uniqueness, Taq Kasra poses a very significant conservation challenge. A series of partial collapses of the brick vault in 2019 and 2020 shows the urgency for the stabilization measures.

In October 2020, the Iraqi Ministry of Culture, Tourism and Antiquities contacted ALIPH to request assistance for Taq Kasra. In November, the Foundation financed a conservation assessment mission carried out by Consultancy for Conservation and Development and coordinated by the University of Pennsylvania to define the necessary urgent measures. A subsequent mission by ICONEM, also funded by ALIPH, resulted in 3D documentation with high-resolution scans and photographs of the monument.

Now, ALIPH's Foundation Board has approved a 700,000 USD grant for the University of Pennsylvania and Consultancy for Conservation and Development to implement emergency measures, which will stabilize the monument until a full-scale conservation can begin.

The Iraqi State Board of Antiquities and Heritage (SBAH), the University of Pennsylvania, and Consultancy for Conservation and Development are closely cooperating on this project. To prevent further collapse, they will install specialized scaffolding that will take the load off the parabolic arch. This flexible scaffolding will adjust to the natural movement of the walls, as well as the expansion and contraction of the materials caused by temperature fluctuations.

At the same time, the conservation team will install sensors to monitor the cracks and train SBAH staff to manage the equipment and analyze the data. Once the scaffolding is in place and the arch is stabilized, the teams will use the high-resolution scans and photographs, as well as geophysical data and information from the sensors, to develop a full conservation plan.

"Our aim is to protect this heritage of global importance with the help of friends of Iraq. We are grateful for the quick response from ALIPH," said Dr Laith Hussein, the director of SBAH.

"The University of Pennsylvania and the Consultancy for Conservation and Development are honored to be partnering with the experts of the Iraqi Ministry of Culture and the State Board of Antiquities and Heritage to preserve this highly significant monument for the people of Iraq and for all humanity," said Dr Michael Danti, Program Manager of the Iraq Heritage Stabilization Program at the University of Pennsylvania. "We thank the ALIPH Foundation for enabling the planned emergency site stabilization and for their steadfast safeguarding of endangered cultural heritage across the globe."

"The exceptional heritage of Iraq, so scarred by conflicts and terrorism, is a priority for ALIPH", statedValéry Freland, Executive Director of the Swiss Foundation. "This project to stabilize one of the most remarkable monuments in the Middle East is ambitious, because we need to set up an extremely complex stabilization system as quickly as possible. ALIPH will work hand in hand with the Iraqi Ministry of Culture and the University of Pennsylvania to save this monument."