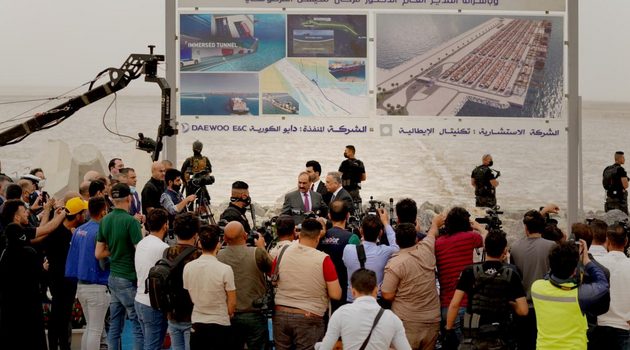 By Editor on 14th April 2021 in Construction & Engineering In Iraq, Iraq Transportation News

Prime Minister Mustafa Al-Kadhimi has laid the foundation stone for the next phase of the giant Grand Faw Port project.

This phase consists of:

Iraq's Ministry of Transport signed a contract with Korea's Daewoo in January to complete these five infrastructure elements.

Details given at that time mentioned the construction of a 14-kilometer navigation channel extending to the sea, the basin for the ships that will dock at the port, and an underwater tunnel, which is to be the largest of its kind. The navigation channel will have a depth of 19.8 meters, which will involve the removal  of 110 million cubic meters of mud deposits.

Reuters reported that the contract is worth $2.625 billion.