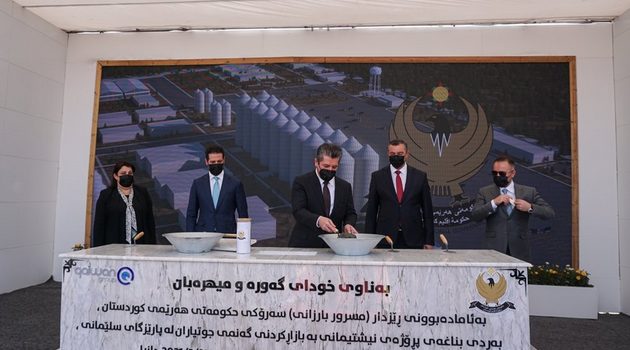 The $122 million project will be implemented by Qaiwan Group, in accordance with international standards, and finalized by 2025.

At the inaugural ceremony, the Prime Minister described the agriculture project as a strategic investment to support local farmers and strengthen the Kurdistan Region's food security.

Under its ambitious reform and economic diversification plan, the Kurdistan Regional Government has invested 8 percent of its annual budget in agriculture since the formation of the ninth Cabinet, a significant increase compared to 1.5 percent under the previous cabinet.

• A Research and Development Center

• An On Site Medical Clinic

• A Weighing and Measuring Facility

The Prime Minister also noted these projects will create thousands of new job opportunities in the Kurdistan Region. "We aim to bring our nation back on its feet, as well as unlock its potential as a regional producer."

According to statistics provided by the Ministry of Agriculture, the Kurdistan Region has approximately 6.5 million dunam of arable lands, of which only half is used for agricultural purposes. With an annual production rate of more than 1 million tons of wheat, the Kurdistan Regional Government aims to boost production and make use of its rich lands through further strategic investments.