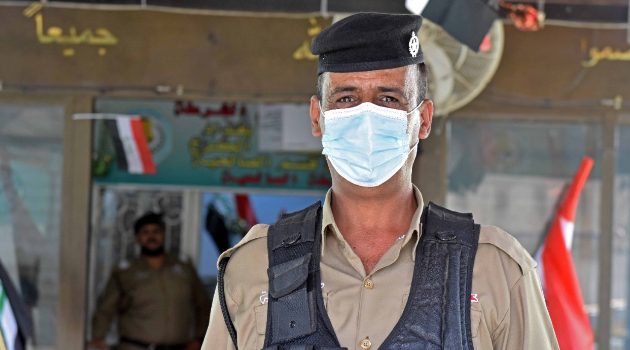 Policing for the People: New initiative to boost local police services in Iraq

Police stations across Iraq will become more service-oriented and will better respond to the needs of citizens thanks to a new initiative between the United Nations Development Programme (UNDP) in Iraq and the Ministry of Interior (MoI), generously funded by the governments of Canada, Germany, and the Netherlands.

The Model Police Station Pilot establishes a policing model that increases trust between citizens and local police, restores responsive, effective, and accountable local police services that are accessible to both men and women.

It incorporates recommendations and priorities from Iraq's Local Police Service RoadMap launched in November 2019 and reflects the results of assessments that address challenges within the existing system.

The Pilot has a strong focus on crime management, police-community relations and gender responsive policing, including investigating the presence and role of female police officers in Iraq, as well as increased accessibility to local police stations by women, girls, and youth from minority ethnic groups.

The Model Police Station 'design outline' has been developed in consultation with the MoI to inform what a Police Station in Iraq should look like. Recommendations from the pilot will be trialed across six police stations in Anbar, Baghdad, Basra, and Ninewa governorates.

This initiative compliments a series of trainings that have been delivered with UNDP's support over several years, including improving the effectiveness of local police for mid-level managers in the Iraqi local police, basic leadership training, and criminal investigation.

"I welcome the model police station pilot initiative implemented in partnership between UNDP and MoI. This initiative is essential to advance the local policing in post-Daesh Iraq. The model police station initiative complements the ongoing support that is already provided by UNDP to strengthen local policing in Iraq, including specialised trainings, development of the Local Police Service Road Map and Standard Operating Procedures for Criminal Investigation. This initiative is another milestone for the UNDP and MoI partnership, to further improve local policing services to local communities. This is essential for Iraqi's long-term stability and development." says Deputy Minister of Interior for Police Affairs, Lieutenant General Emad Mohammed.

"As Iraq recovers from the ISIL conflict, now is the time to implement a new local police approach that is more citizen-responsive, and service-orientated, and addresses the needs of women and girls, both inside the police service, and within communities.," says Resident Representative of UNDP Iraq, Zena Ali Ahmad.

"UNDP is committed to working alongside the Ministry of Interior to ensure the recommendations made under this pilot - such as increasing the number of female police officers and improving access to vulnerable women - are implemented as soon as possible," she adds.

The Model Police Station Pilot was supported by the governments of Canada, Germany, and the Netherlands.