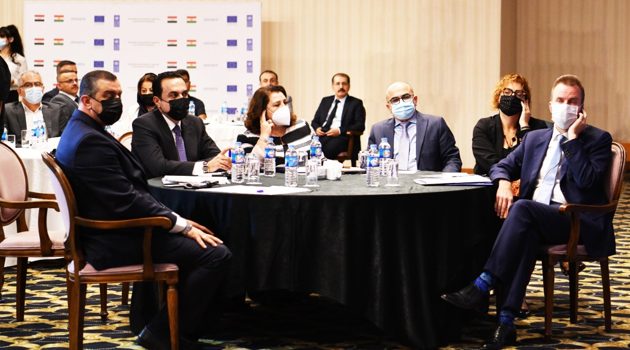 By Editor on 13th September 2021 in Construction & Engineering In Iraq

Three innovative projects aimed at promoting sustainable energy solutions were launched today in partnership with the European Union and the United Nations Development Programme (UNDP) in Iraq and the governorates of Erbil, Sulaymaniyah, and Duhok.

The projects, which were designed by the individual governorates based on their strategic plans, come at a time where many governorates in the Kurdistan Region of Iraq (KRI) face environmental sustainability challenges, and are seeking sustainable alternative sources of energy, in line with their commitment to reducing Greenhouse Gas (GHG) emissions according to the developed Sustainable Energy Action Plan (SEAP) in 2018, under Supporting Recovery and Stability in Iraq Through Local Development programme, funded by the EU and implemented by UNDP.

"Providing renewable energy solutions to the Kurdistan Region of Iraq is critical to addressing many of its environmental challenges. These projects are the first initiatives for the region, pioneering its transition from traditional sources of power to clean energy, and showcases the individual governorates' commitment to a cleaner, greener Iraq."

The Ambassador to the European Union to Iraq, Mr. Ville Varjola, mentioned:

''The launch of three projects is the result of committed and innovative work under the leadership of the Governor of Erbil, Governor Dohuk and Governor of Sulaymaniyah to address local priorities but in parallel to take steps towards green economy and reduction of CO2 emissions.

"Both are high priorities for Iraq as well as for the EU cooperation with Iraq. I congratulate these achievements and look forward to speedy implementation to the benefit of the people of Erbil, Dohuk and Sulaymaniyah.''

"This project enhances our governorate's efforts in adapting alternative and advanced methods to generate electricity, such as solar energy. The project, supported by the United Nations Development Programme and funded by the European union, aims at benefiting from natural resources and advance the development of power generation, development of agriculture sector, and encourage farmers to increase local production in the region.

"This project is a new confirmation to the importance and the effectiveness of the partnership between the Governorate of Erbil and UNDP and the coordination with local communities and private sectors."

"This project was nominated according to Sulaymaniyah (Slemani) Governorate's Strategic Plan for Renewable Energy and Environment, approved by European Union and UNDP, in cooperation with UNDP, Planning and Electricity Directorates in the governorate.

"It is an important project for lighting the main streets, reducing electricity consumption and CO2 emission, saving huge expenses for the public treasury, providing job opportunities and contemporary development for the governorate, directly benefiting citizens."

"We appreciate the active role of UNDP to serve the people of Duhok, from refugees and internally displaced people to the local communities for years.

"We are particularly grateful for the initiation of the first project on renewable energy, which is the solar power project in our governorate that will protect and sustain a healthy environment"

The projects reaffirm the governorates' commitment to developing clean energy solutions, in addition to UNDP's and the EU's continuous support to projects that address climate change and a green economy in Iraq, under Supporting Recovery and Stability in Iraq Through Local Development programme, funded by the EU and implemented by UNDP.