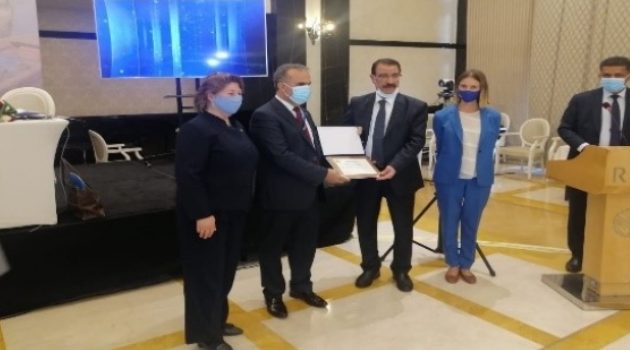 By Editor on 14th September 2021 in Agriculture

His Excellency the Minister of Agriculture Mr. Muhammad Karim Al- Khafaji honored Dr Salah El-hajj Hassan FAO Representative in Iraq and his team of experts in appreciation of their distinguished and outstanding efforts supporting farmers' livelihoods in Iraq.

During the inauguration of an inception workshop of the EU-funded FAO project: "Restoration and strengthening the resilience of agri-food systems in Southern Iraq", organized on 9 September 2021 in Baghdad, the Minister honored the successful work undertaken by FAO in Ninewa Governorate and handed over certificates of appreciation.

The Minister said he valued the efforts made by FAO to help smallholder farmers, especially in the liberated areas after ISIS was defeated, and stressed the great role played by the organization in order to advance the reality of the targeted governorates and improve livelihoods, food and water security by supporting agriculture, both animal and plant sectors.

H.E Mr. Al-Khafaji said: "These efforts help raise the capacity of smallholder breeders and farmers and develop their skills through inputs capacity-building and providing the necessary support to improve their livelihoods with their efforts and experience and to achieve self-sufficiency with continuous work and concerted efforts".

The special ceremony was further attended by senior officials, including Dr Jasim AL-Falahi, Minister of Environment; Ms Irena Vojáčková-Sollorano - Deputy Special Representative of the Secretary-General for Iraq and Resident and Humanitarian Coordinator; Ms Barbara Egger - Head of Cooperation at the EU Delegation to the Republic of Iraq;; and Mr. Fadel Mozan, representative of the Ministry of Water Resources.

A number of Ninawa farmers and beneficiaries of the EU-funded project in Ninewa were present and offered a taste of their high-quality dairy products. The lessons learned in Ninewa will be replicated in southern Iraq.