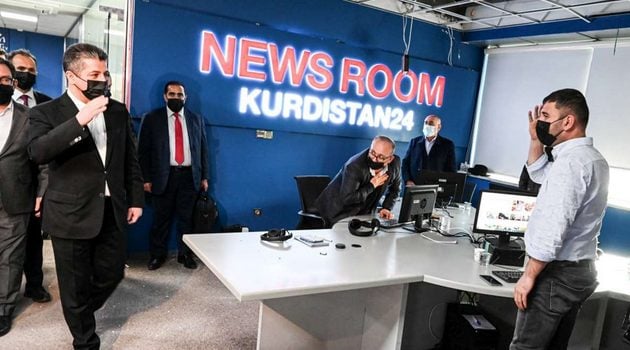 Iran's Islamic Revolutionary Guards Corp (IRGC) has claimed responsibility for a missile attack early on Sunday near the US consulate in Erbil. Among the buildings damaged were the offices of the Kurdistan24 news agency.

No injuries were reported, which Iran said was retaliation for an Israeli strike in Syria that killed two of its Revolutionary Guards.

The Ministry of Interior of the Kurdistan Regional Government issued the following statement regarding the missile attack in Erbil early on Sunday morning:

"The ballistic missiles were launched from the eastern side of Iraq's border.

"The attack resulted in material damages only, with no human casualties reported, except for one civilian being lightly wounded.

"The security forces have already launched an investigation into the incident and we will update the public about the findings shortly.

"We condemn these cowardly attacks, and assure the people of the Kurdistan Region that Erbil is, and will remain, safe."

The Ministerial Council for National Security held an extraordinary meeting on Sunday, headed by the Commander-in-Chief of the Armed Forces, Prime Minister Mustafa Al-Kazemi, to discuss the attack. The Council stressed that the missile attack, which was launched from Iranian territory and targeted the Iraqi city of Erbil, is an attack on the principle of good neighborliness between Iraq and Iran, and the historical relationship between the peoples of the two neighboring countries, as well as a violation of international laws and norms.

"The United States condemns the criminal attack on civilian targets in Erbil. Iranian regime elements have claimed responsibility for this attack and must be held accountable for this flagrant violation of Iraqi sovereignty and for terrorist attacks on innocent civilian properties."

Iran Attack on Erbil goes beyond Retaliation for IRGC Deaths