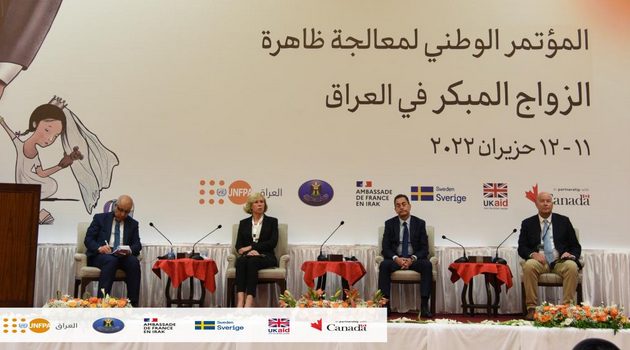 The United Nations Population Fund (UNFPA), and the Council of Ministers Secretariat (COMSEC), in partnership with the Women Empowerment Department (WED), and support from the United Kingdom, Sweden, France and Canada, organised a two-day conference to address early marriage in Iraq.

The conference, which took place on 11-12 June, recognised the alarming situation with early marriage which has increased from %21.7 to %25.5 for the past ten years in Iraq.

The event brought together government entities, local authorities, religious and tribal leaders, civil society organisations, young people, academia, and representatives of the international and donor community to discuss the root causes of early marriage, its impact and solutions to address it.

Representatives of the government of Iraq and the government of the Kurdistan Region of Iraq, ambassadors, tribal and religious leaders, academia and experts shared profound evidence on the devastating consequences of early marriage on the socio-economic progress, psychological and physical health of young girls and boys, families, communities and society at large.

"Tribal communities and young people affected by early marriage have asked us to raise our voice and advocate more for women and girls' rights and empowerment and take a step forward in addressing early marriage in Iraq, including the Kurdistan Region. This event shows the criticality of reducing early marriage to fulfill the rights of girls and women, and accelerate achievement of SDGs in Iraq."

The conference participants discussed and elaborated recommendations that will be taken by the Women Empowerment Directorate under the leadership of the Secretary-General of the COMSEC to support the local authorities to reduce and prevent early marriage in Iraq.

The Early Marriage is #NotNormal also includes a social media campaign and a partnership with Rakuten's Viber to promote the end of early marriage.

UNFPA, the United Nations Population Fund, delivers a world where every pregnancy is wanted, every childbirth is safe and every young person's potential is fulfilled.