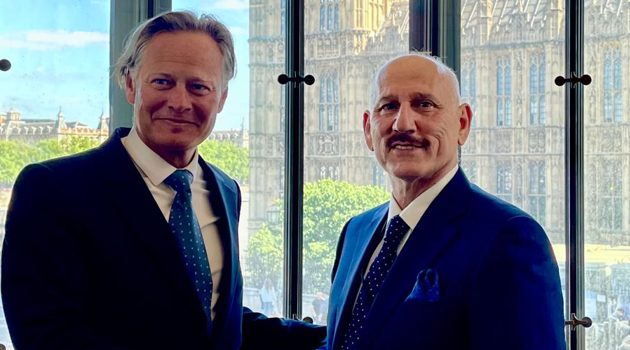 Sheikh Mohammed met with the Hon Matthew Offord MP, the Chairman of the United Kingdom Parliament's All Party Parliamentary Group on the Republic of Iraq at the Palace of Westminster. The meeting was positive with both sides agreeing to the importance of unity in national politics. The discussions covered topics such as security, the future of Iraq's economy and the role of international actors in the future of Iraq.

"Iraq faces some real struggles in the near future. Electricity blackouts, water shortages and rising unemployment all at a time of soaring summer heat is going to create significant stress within communities. Now is not the time for siding with division; now is the time for cooperation and working together to solve these nation-wide issues. There must be political leadership to confront these harsh realities"

At the end of the meeting both Mr Offord and Sheikh Mohammed confirmed their desire to work together in the future and to support Sheikh Al-Khuzai's program to solve crises in Iraq.

Sheikh Mohammed then met with Chairman of the Royal United Services Institute (RUSI), The Rt Hon Sir David Lidington. Sir David is a former foreign Minister and former Deputy Prime Minister. Given the nature of RUSI's work the discussion was focused on the security of Iraq and the potential for unrest in the forthcoming summer months.

Sheikh Mohammed spoke passionately about the importance of both the tribal and religious leaders of the country, army officers and members of the judiciary, whose leadership are critical in the forthcoming months in ensuring the unity of the nation. He also spoke about the importance of creating new economic opportunities to deliver new jobs for the young adults of Iraq.

The discussion also centred on the role of foreign actors and his name being nominated for prime minister. Both men agreed that while Iraq is not currently able to build its future alone, its future and the road to get there must be decided by Iraq and the Iraqi people. While Sheikh Mohammed welcomed foreign investment he also said that he would not allow foreign countries to determine the future of the nation.

The end of the meeting came as both Sir David and Sheikh Mohammed agreed to work towards the potential of creating a bridge between RUSI and the leading actors that help to make up Iraqi political society.

"It is clear that senior people within the political sphere of the United Kingdom want to see a bright future for Iraq and are willing to help the nation achieve it. But, they will not waste their time on a country that is trying to tear itself apart. Strong leadership and a unified Iraq, based on our shared ambitions from Zakho to Fao is how we will build a better Iraq."

Could Alkhouzai be Iraq's next Prime Minister?